The man who ploughed his car into a Bay View Rd home at the weekend may have been drinking, police say.

A Mercedes-Benz skimmed the power pole outside the South Dunedin house about 3.45am on Saturday.

The car careened through the fence and crashed into the bedroom of Megan Percy and Robert Allum, shoving their bed into the centre of the room.

Senior Sergeant Anthony Bond, of Dunedin, said there were no injuries to either the occupants of the bedroom, or the 30-year-old driver.

However, the driver was processed for drink-driving.

He recorded a breath alcohol-level of 768mcg, but elected for a blood sample to be taken, Snr Sgt Bond said.

"We're just awaiting the results of that blood sample, but I assume it'll be over and he will be charged," he said. 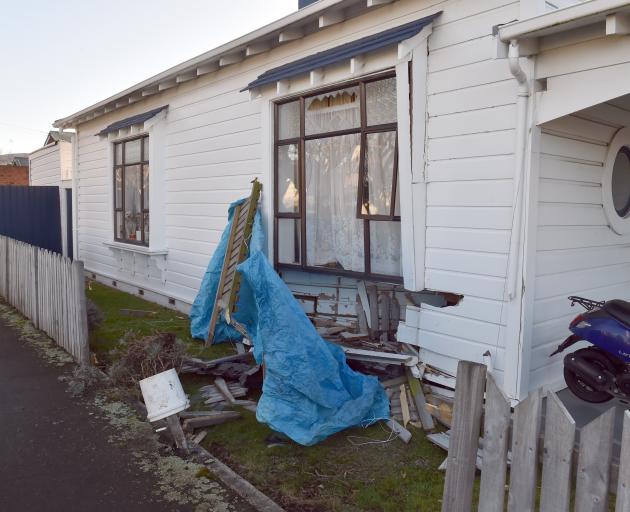 The residents of this Bay View Rd home had a lucky escape early on Saturday after a car ploughed into their bedroom, hitting their bed. PHOTOS: GREGOR RICHARDSON

Ms Percy and Mr Allum were sound asleep in their Bay View Rd home before being rudely awoken at 3.45am.

Ms Percy said she woke up hysterical with her head right beside the car.

She had heard the sound of smashing glass and rumbling, but could not see what was going on without her glasses.

She was panicked and screaming, unable to process what had happened.

Mr Allum said he was taken right back to the Christchurch earthquakes.

The powerful shaking and confusion he felt as he awoke was just like the stress of the quakes more than 10 years ago.

She gave credit to him for staying put and calling emergency services.

After being checked by the ambulance and calming down, the pair tried to get some sleep in their son’s room.

"You don’t really sleep after that," she said.

The hole in the wall had been covered with a tarpaulin, which kept some of the draught out of the house and hid the wreckage.

Underneath lay splintered hunks of wooden fence, the fractured grill of the car, the remains of an ornamental flamingo and the family CD collection, which was kept against the wall.

Family photos had fallen from the walls and large shards of glass from the windows littered the floor. 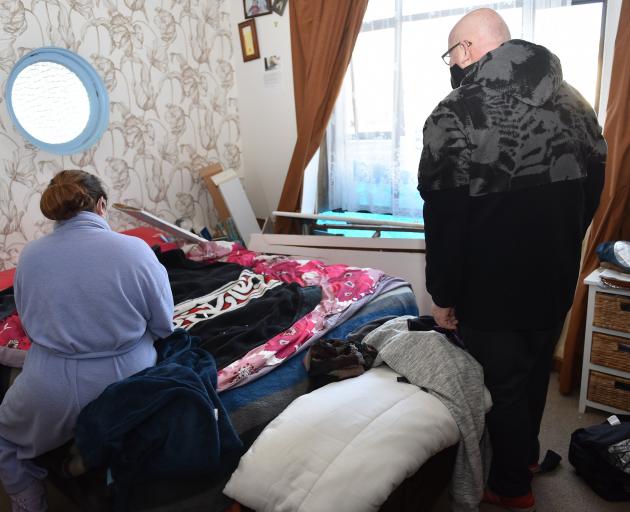 Megan Percy and Robert Allum look over the damage done to their Dunedin home after a car crashed through the wall beside their bed.
The family was devastated about the damage, but the insurance company was assessing it soon.

"You can replace this, but you can’t replace lives,’ Mr Allum said.

Their 2-year-old dog was sleeping on the foot of the bed and was shaken, but uninjured.

The event was traumatic, but joking was about all they could do about it.