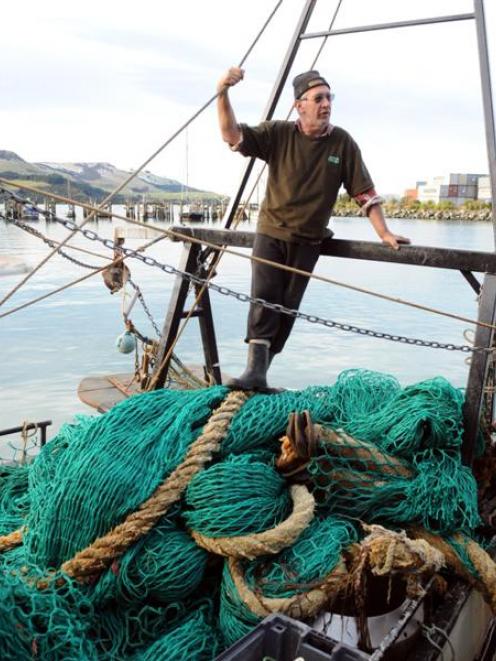 Careys Bay fisherman Les Poulsen with the 100m-long net he hauled up near Blueskin Bay. Photo by Stephen Jaquiery.
A Careys Bay fishermen is out of pocket and angry after finding a dumped net as long as a rugby field off the coast north of Otago Harbour.

The Pioneer II skipper says since hauling aboard the 100m-long net he has lost two days fishing and blown a hydraulic hose.

"It's cost me the best part of a thousand bucks."

The commercial fisherman said he was fishing off Blueskin Bay when he hauled up the net, which looked as if it had been deliberately dumped, with several tonnes of old rope weighing it down.

"I could have cut it, but these are the fishing grounds where I fish all the time."

He believes the dumped rope and net - a potential environmental and shipping hazard - may have come from one of the foreign-owned fishing vessels which visited Dunedin and were known to anchor in the area.

"They think it is cheaper than getting a skip in at the wharf.

"I want to know if there [are] any more out there."

Mr Poulsen had notified Maritime NZ, MFish and the Otago Regional Council of his find.

MFish Otago field operations manager Murray Pridham said it was not common to find nets dumped off the New Zealand coast, and unless someone witnessed its disposal, it would be impossible to identify the culprit.

Regional council services group manager Jeff Donaldson said it was the first complaint about a net dumped in the ocean the council had received.

"We don't have proof of who it is, but ... we will be writing to all the foreign vessel charters, advising them that rubbish disposal is a breach of the Otago Coastal Plan.

The council had arranged a skip to dispose of the rope and net, but was notified by Mr Poulsen that someone else wanted the item.

While the council could seek recovery and disposal costs, he confirmed the council did not have the authority to fine any offending vessel and this might need to be reviewed.