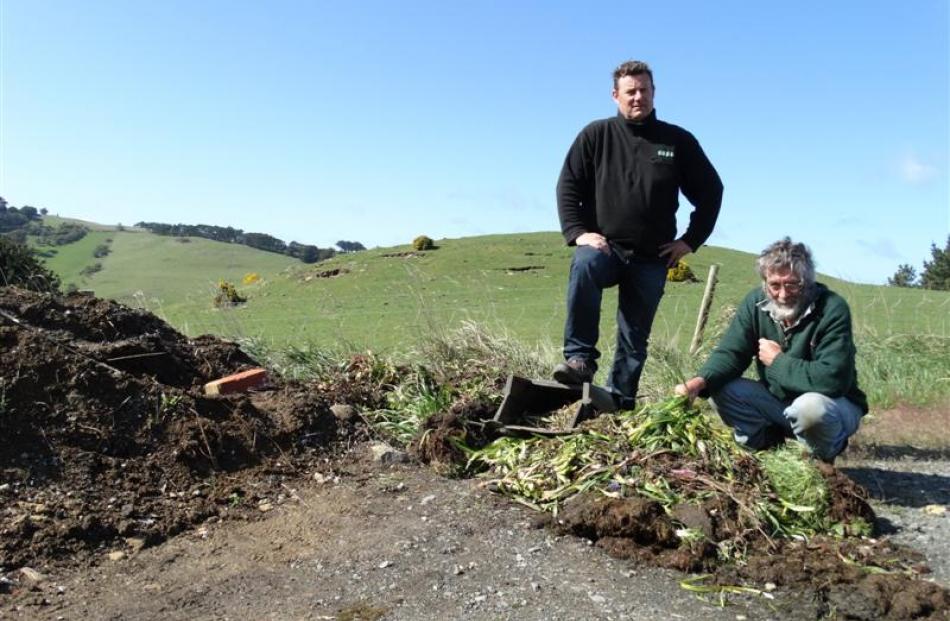 Otago Peninsula Community Board deputy chairman Paul Pope (left) and resident David Lyttle look over some of the green waste dumped at Centre Rd on the peninsula in recent weeks, which is blocking an access way to the Lyttle family farm. Photos by... 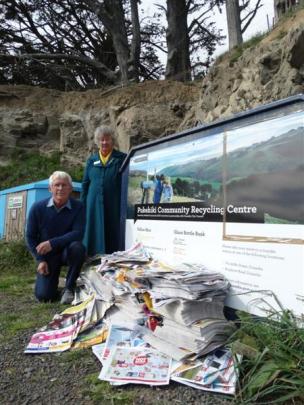 Otago Peninsula Community Board member Christine Neill and local resident John Ware show some of the many hundreds of undelivered advertising fliers that have been dumped in the recycling bins at the Pukehiki Recycling Centre.

A recent spate of nuisance rubbish dumping around Dunedin's rural fringes is frustrating residents and the Dunedin City Council, and raising concerns about what lies ahead for the summer. Brenda Harwood takes a look at the issue.

Dunedin's rural communities are frustrated by a recent spate of illegal rubbish dumping, and are calling on these ''inconsiderate opportunists'' to give it a rest.

Dumping has been occurring weekly at the site in the past month or so, with an accumulation of branches, grass, weeds, topsoil and gravel blocking an access point to the farm.

''It's a bloody nuisance, especially as it has been happening regularly, and is worse in the summer,'' Mr Lyttle said.

''Because of this stuff, the simple matter of moving stock through a gateway becomes a problem - the rubbish will have to be cleared away first,'' he said.

Both botanists, Mr Pope and Mr Lyttle also expressed concern at the potential environmental impact of the invasive plant species among the green waste, including grape hyacinth and ranunculus.

''It is frustrating for everybody. These people are lazy, inconsiderate opportunists who create problems for other people,'' he said.

Just over the hill at the Pukehiki Recycling Centre, Otago Peninsula Community Board member Christine Neill and local resident John Ware were also annoyed this week to discover the 12 community recycling bins overflowing because of a massive pile of undelivered advertising fliers.

''We have 12 bins for the whole of our community - about 80 houses - so someone has reduced that capacity by one-sixth in one go,'' Mr Ware said.

Mrs Neill was so incensed she contacted the retailers to tell them they had paid ''good money'' for up to 3000 fliers that had not been delivered.

Both kinds of dumping are an ongoing headache for the Dunedin City Council, which is taking action in both cases.

Contacted by The Star, Dunedin City Council acting solid waste manager Catherine Irvine said some offenders went to ''extraordinary lengths'' to illegally dump rubbish, often transporting it some distance out of town under the cover of darkness.

It was surprising anyone would see this as more convenient or cost-effective than using one of the city's four available disposal facilities or recycling services.

The areas most commonly used by illegal dumpers were around the rural edges of the city, including parts of the Taieri, Blackhead, Green Island and North Dunedin.

The problem tended to be worse over the summer, as people worked in their gardens.

• Members of the public who see illegally dumped rubbish or who witness an incident are urged to phone 477-4000 and report it, but not to disturb the scene.

Contractors will remove the rubbish, which will be examined for clues as to the offender's identity, and could lead to a council infringement notice and a fine of up to $400, or possible court action.