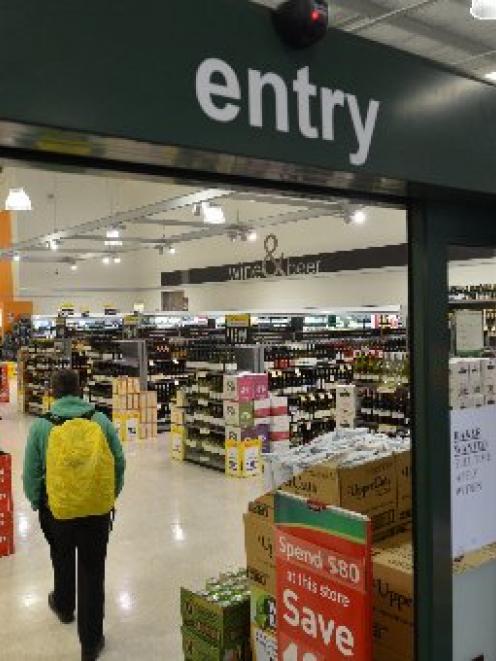 Alcohol would be sold at supermarkets between 9am and 9pm under the council's plan.
The Dunedin City Council has dropped the toughest restrictions on bars and instead turned up the heat on off-licence sales, with the release of its local alcohol policy.

The provisional policy, made public today, outlined plans for tougher 9am to 9pm hours for alcohol sales from supermarkets and other off-licences in the city.

That was tighter than the 7am to 11pm trading hours permitted under existing rules, and the 7am to 10pm hours proposed with last year's draft policy, before consultation on the draft policy drew more than 4000 public submissions.

A moratorium on new off-licences in North Dunedin - from the Octagon to the Dunedin Botanic Garden - would also be introduced to control the prevalence of bottle stores in the student quarter.

But inner-city bars have been granted something of a reprieve, with plans to close outdoor areas from 11pm, and ban the sale of shots after midnight, both dropped.

A 3am closing time was still proposed - one hour earlier than the existing 4am restriction - for all non-residential bars, hotels and taverns.

However, a one-way door policy, originally suggested for 1am, would now begin at 2.30am, just half an hour before closing time.

And any venue offering live entertainment would be allowed to remain open until 4am, as long as they had a cover charge and a one-way door policy from 2.30am.

"The committee has listened and believes it has struck the right balance between keeping people safe from alcohol-related harm and retaining a vibrant and sustainable central city.''

The policy would be considered by councillors at Monday's full council meeting.

If approved, submitters would have 30 days to lodge an appeal, before the policy came into force.