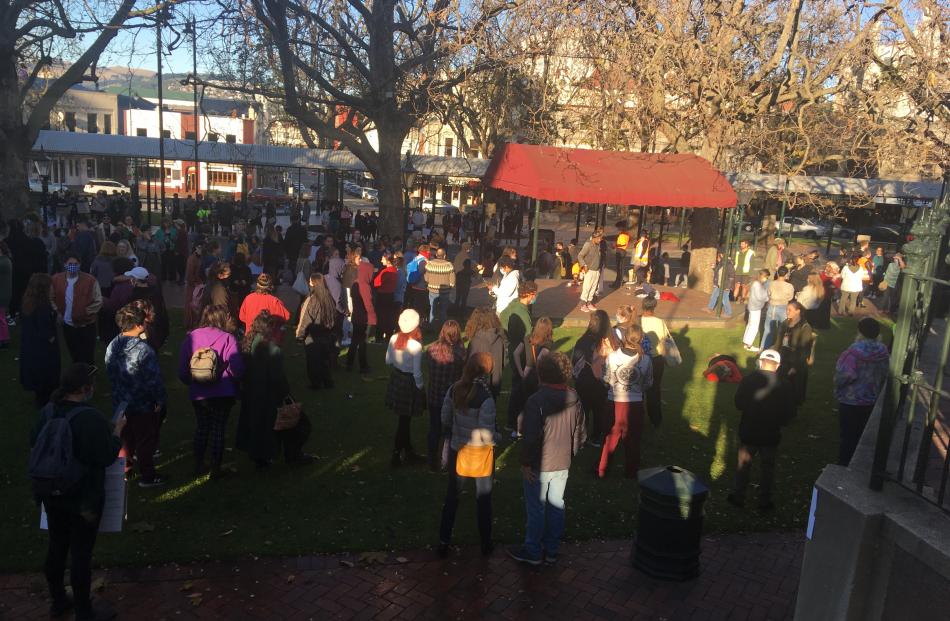 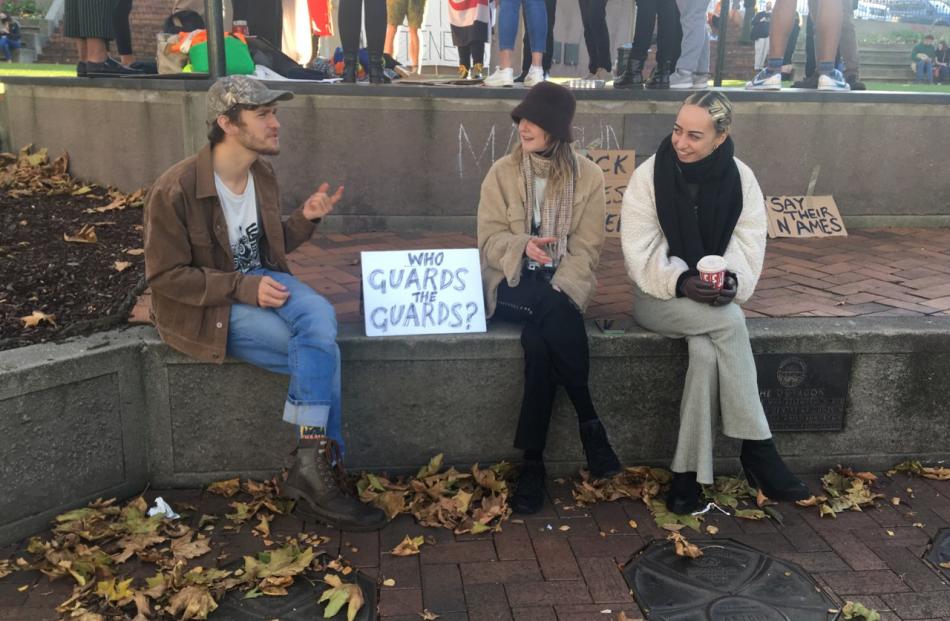 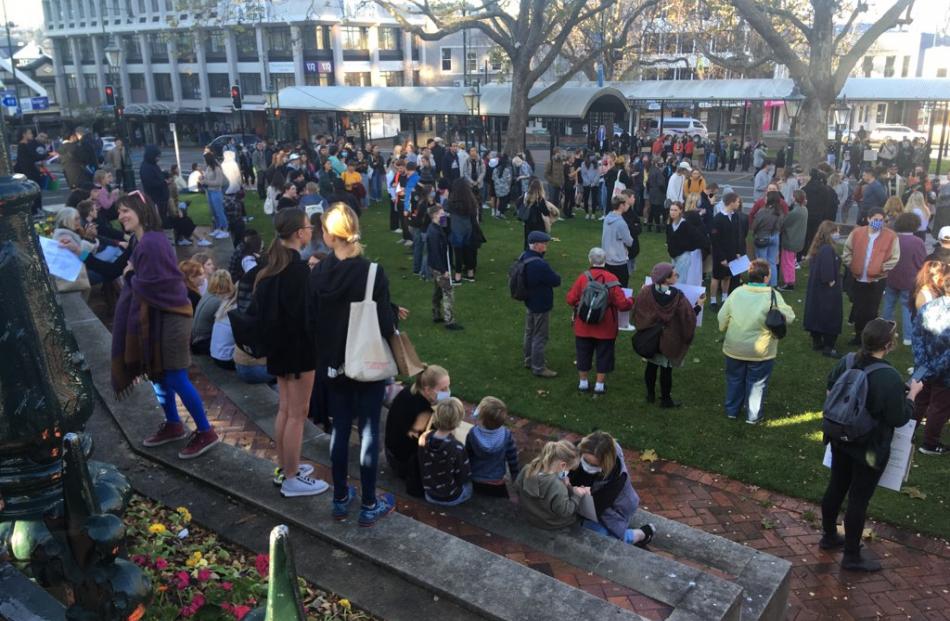 Hundreds of people gathered in Dunedin's Octagon to show their solidarity with the "Black Lives Matter" movement in the United States and to decry racism.

The peaceful protest was one of several in New Zealand this afternoon, following the death of African-American George Floyd when he was being arrested in Minneapolis.

His death on May 25 sparked widespread protests and rioting in the US in the days that followed and added to the list of disturbing scenes involving law enforcement over the years.

Dunedin protest organisers, conscious of Covid-19 restrictions, made efforts to keep people in groups of 30 and to space them out.

Several brought with them placards that read "Black lives matter" and "I can't breathe" and one said "Good night, alt-right".

One of the speakers, Edward Ennion, said the people at the protest were unified in sorrow and anger about lives lost needlessly.

"We're sick of this, we're tired but this keeps happening, so we cannot rest."

Video of Mr Floyd’s arrest showed him being pinned to the ground by police officer Derek Chauvin for about 10 minutes.

Chauvin has been charged with third-degree murder and manslaughter.

If it was not a fine day and a public holiday and high unemployment and CD19 there would be hardly anyone there.

Ray your comment is an assumption and inappropriate given the reason for the event. It's good to see people around the world care enough to go to a peaceful protest.

Ray, when the time comes for useless and pointlessly negative comments to be made - no doubt it'll be you time to shine mate.

This is an incredibly valid and positive step forward for the US and the world. It's warming to see Dunedin people uniting to share their feeling of outrage at the injustice of racial prejudice by police.

It was raining hard in other NZ centres, and they drew big crowds too. And if anything Covid-19 probably kept people away wh might otherwise have attended (me, for one).

Totally Awesome Dunedin Much respect to all that could attend. Now seriously lets see a similar turn out for those against how the council are changing Dunedin

ALL lives matter, regardless of age, gender, religion, political leanings, colour and race. No single entity is better than any other, and neither has it ever been.

The system we live in doesn't see it that way hence the protests. People of colour, women and young people carry varying degrees of less importance as shown by real world outcomes of the system we live in. If everyone got the same punishment for crimes irrespective of race, if women were paid as much as men, if young people were not asked to sacrifice a stable environment just so adults can excessivly consume goods.... If those and many more things happened then maybe all lives would matter the same amount. But unfortunately at the moment they don't.

Sorry...you are showing your white privilege! You are trying to diminish the BLM movement. Supporters of "All Lives Matter" are making things about themselves, "YOU ARE NOT IN NEED. YOU ARE NOT IN DANGER. YOU ARE PRIVILEGED WHETHER YOU LIKE IT OR NOR. SOCIETY GIVES YOU PRIVILEGE JUST FOR BEING WHITE. YOU CAN BE POOR, YOU CAN BE STRUGGLING.. AND STILL YOUR SKIN COLOR IS GIVING YOU MORE PRIVILEGE THAN YOU EVEN REALIZE. IF ALL LIVES MATTER WHY ARE BLACK PEOPLE KILLED FOR JUST BEING BLACK, WHY ARE IMMIGRANTS PERSECUTED? WHY ARE WHITE PEOPLE GIVEN OPPORTUNITIES THAT PEOPLE OF OTHER RACES AREN'T…WHITE PRIVILEGE."

What a bunch of pathetic losers! There to show support for a bunch of criminals, looters, and rioters. It's about the death of George Floyd. It's about his memory and what a corrupt police officer did to him. What does burning down shops and stealing their contents have to do with commemorating the loss of George Floyd? Nothing! What happened to George Floyd was terrible and nobody thinks its right. But the actions of rioters is unacceptable and should be condemned. There is as much RACISM here in New Zealand as there is in the US. Peoples of European descent here in NZ are in denial. "Showing solidarity" with BLM in the US somehow makes them feel better and absolves them of the RACIST sins they commit here. Where is the show of solidarity for the indigenous people of NZ, the pacific islands & other people of color living here? I implore you to stand back & listen to the things you say about those of us living in the margins. Look at the color, sex & sexual identity of the countries biggest companies, is that what you call diversity? It's awesome you hypocrites feel good & can stand in solidarity with BLM. To bad you hypocrites can't do the same for those of us living here!

Lots of assumptions there. These protests help the marganalised people of NZ too. The opportunity to bring people together on this issue that is systemic throughout most all capitalist countries just happened to be inspired by an over seas action. These protests put NZ police on notice that what happened in America and other racism is not acceptable here and police need to look at the way the conduct themselves. It puts government on notice that inequality between people is an issue the community wants fixed.

And I don't think the protestors are the terrible people you make them out to be. It's not like right wing shock jocks were out there protesting for moral redemption.

I say cheer on people that take time out too raise awareness around racism, and then you can raise the good points you have raised and create a focused discussion around local problems. But give good people that are doing their best to stop racism the support that will encourage them and others to keep changing the world for the better.

The police officers should have been arrested and charged straight away. All life is sacred no matter who you are.

I can't help feeling that the protest gatherings are also the public's way of thumbing their noses at the Government. i.e. Move us on from level 2.

The lack of Government reaction to these gatherings is conspicuous by its absence. It has no backbone because if it were serious about gatherings of no more than 100 people, they should have sent in the army to disperse the crowds.

I despair of what's going to happen next.

You have no idea what your talking about. First, under Americans Federalism, the governor of each state has the authority to set the terms for lockdown. Most governs went with red, green and yellow not levels. Also, America isn't a nanny state. The government isn't paying people while they don't work.that said, companies aren't paying people either. No work, no pay. So people are pissed off they have been locked down for 8 weeks with no pay. So you think in light of the police brutality that started the rioting a larger more aggressive police presence is a good idea? Stupid! The 100 person limit imposed by NZ for gatherings isn't global...it's only NZ. The US Constitution prohibits what the governors are doing, all people have an inate right to freedom and the governors are violating that right. So Americans are pissed and not going to take it anymore. They aren't sheepeople like kiwis who blindly follow their government. George Floyd death was a spark that set it all off. You should be worried. If the bottom falls out in the US, the economic impact for NZ will be devestating. As far as supporting BLM, NZ has its own issues with racism. Charity starts at home!

I hope these protesters self isolate or are they not obliged to follow the same rules as business owners? I assume mayor hawkins will publically state the protest was inappropriate given no seperation was followed, yeah right.

Great to see people fighting racism. It's much needed. That said for so many women like myself who are victims of domestic violence it would be encouraging to see violence towards woman take seriously. It took me over 13 months and 3k to uphold a protection order against a "justice" system that is highly prejudice towards women. The perp paid nothing and nobody so far has been held to any sort of account for how I was treated or why it took so long. So yes racism is real in NZ but so is institutionalised prejudice against women and sadly that's just glossed over.