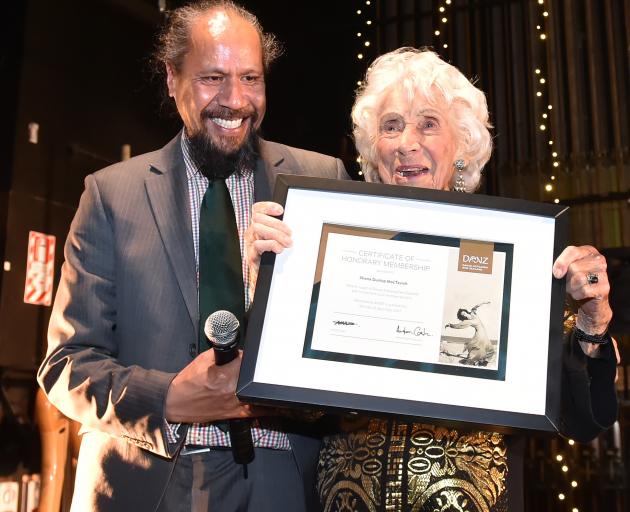 The 97-year-old was recognised for her contribution to dance at a special presentation held at the Regent Theatre yesterday afternoon.

At the event, Danz chief executive Anton Carter spoke highly of Mrs Dunlop MacTavish as a worthy recipient of the honour, the first time Danz has made anyone an honorary member of the organisation.

The fact all the tables were filled showed the significance of the person being honoured.

He said Mrs Dunlop MacTavish was "a very very special person", who had contributed a lifetime to the art form of dance.

It was an honour and a privilege to welcome everyone to the ceremony, he said.

Mrs Dunlop MacTavish said she was surprised at the extent of the event.

"I had no idea I was getting this sort of tribute."

Mrs Dunlop MacTavish’s old costumes and outfits, as well as archived prints of her life, were on display, and there were dance and musical tributes to her work.

Mrs Dunlop MacTavish was born in Dunedin in 1920. She travelled to Europe in 1935 where she studied with dancer and choreographer Gertrud Bodenwieser and later joined the Bodenwieser Ballet.

However, as many of the dancers were Jewish, she and others left Europe to escape  Nazi persecution.

The dancers were then based in Australia and toured New Zealand during the ’40s and ’50s.

She opened her own dance studio in 1958 and set up Dunedin Dance Theatre in 1963.

Mrs Dunlop MacTavish, who stopped teaching two years ago, said she was most "gratified" to receive the honour.

"I hope you all keep dancing."

Daughter Terry MacTavish, said her mother was "moved and touched" to know she had passed the joy and love of dance on to others.