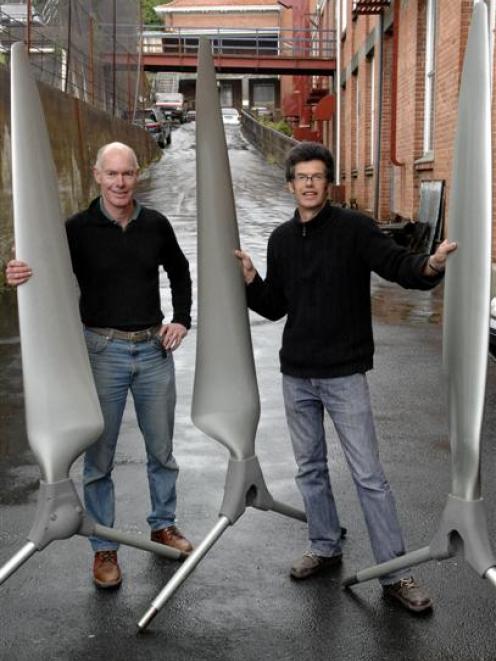 Bill Currie and Wayne O'Hara, of Powerhouse Wind, have one prototype undergoing tests and by Christmas will have finished assembling three more at their Stuart St workshop.

The venture has eaten up more than $700,000 in time, cash and Government subsidies over the past two years, but the two men believe they now have a design that can compete successfully against turbines already on the market.

Six months of testing at sites at Brighton, Waitati and Sawyers Bay will provide the final proof that the turbines are ready to be "unleashed on the public".

Asked if finding an investor to take their design to the market would be like venturing into an episode of the television series, Dragon's Den, Mr Currie joked that they were both engineers rather than businessmen and had already experienced being "mauled" on a couple of occasions.

Neither would hazard a guess at how much it might cost to take their design into commercial production.

They consider the counter-balanced machines, with a single 1.8m blade, to have the advantage over other designs in turbulent wind conditions common around houses.

They would also be cheaper, quieter, better looking and more user-friendly.

Mr O'Hara says that in addition to people in developed countries seeking alternative sources of electricity, there are two billion people around the world who do not yet have access to electricity.

Mr Currie was previously a designer for Fisher and Paykel and Mr O'Hara returned to Dunedin, from Cambridge, to work on the design.

They have made extensive use of Dunedin's engineering and technology infrastructure to custom make components and they have had market research assistance, and $4500 of financial assistance, from the Dunedin City Council.