Dunedin man charged for being too tall on airline 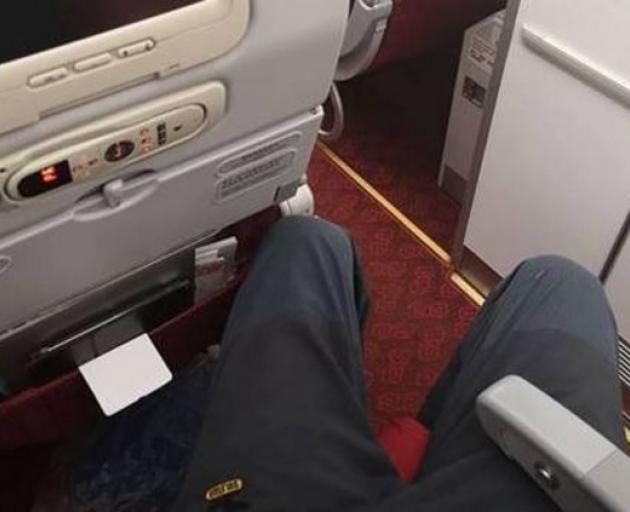 Richard Mountain's legs were too long for the aisle seat he was given on a Hong Kong Airlines flight to Auckland. Photo: Supplied
A Hong Kong Airlines passenger says he is furious and will complain to the airline after he was charged $100 to "upgrade" from one economy seat to another with more leg room.

At 1.98 metres tall [6ft 6in], Richard Mountain, from Dunedin, needs plenty of leg space so when he checked into the Hong Kong Airlines flight in Hong Kong yesterday he requested extra room.

Mountain said he was assured he would be seated in a row with extra space but instead he was given an ordinary aisle seat and his legs were stuck across the aisle.

"They put us at the back of a section so that I couldn't put the seat back easily and I couldn't fit in," Mountain said.

"My legs were in the aisle which is actually an aviation hazard because the aisle was completely blocked."

Mountain, who had been holidaying in Thailand with his girlfriend said the hostess tripped over his legs three times before take-off.

"She banged my knee quite hard and I complained and asked if I could move. I asked them how are they going to get the trolley past and she said I'd have to stand up and move each time." 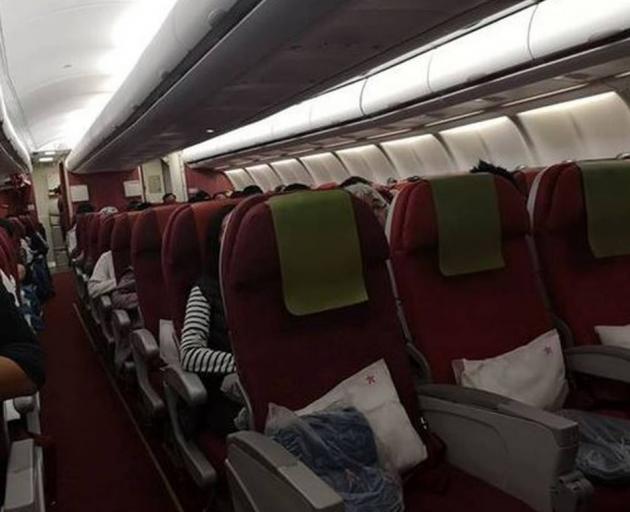 "They said 'We're not upgrading you for free. You've got to pay'. I ended up having to pay $100 New Zealand dollars to sit in a seat which would otherwise be unoccupied."

The 34-year-old from Dunedin said he complained to no avail so he paid the fee.

"I always get extended leg room for free. I've been to 35 countries, over 200 flights in my life and I've never been asked for money for sitting somewhere I can fit in.

"But to charge me extra money for being tall, It was an absolute disgrace."

Mountain said he would write to the airline and make a formal complaint.

The Herald has contacted Hong Kong Airlines for a response.

I don't understand how anyone who is 6ft 6in would not check to see if the seating they booked was not adequate. Airlines don't keep seating a secret. You can log into any airline and check to see if the seat you're booking is appropriate for you and your build or height. Of course, you can try your luck on the day and see if you can move and not pay more, but don't try to get public support when the airline clips your wings and wants you to pay for the upgrade. Just pay for the seat you are going to fit in the first place.

I think most casual observers will note this looks like overplay. I look at those seats quite a lot, and see all the big boys who settle in fine. This guy took a snap of his dire situation but managed somehow to get his crotch half on the corner of the seat; maybe slipped while focusing? The seats he wanted were empty because they're Premium Economy, or what I believe HX call Economy Comfort, and everybody got a look at them when booking, and like our Hero, seemed to have decided against. Unfortunately our hero omits to mention that part, the option for 34 inches pitch comes up when booking. I've seen the odd cruiser deplane in a kerfuffle after trying to bag free upgrades to Business or First the exact same way. The buttock-knee dimension for a 6'6" male is within the seat pitch on basic economy HX seats, it's not great but it's not anything like this kid's creative photography class would lead to believe. The guys 6'8" plus are the ones to worry about. But for this guy, who either slouches like putty or wears his pants around his knees, cabin crew don't tolerate messing around after rotation, and we don't want them to. Want to escape the cheap seats, put the pain on the plastic.