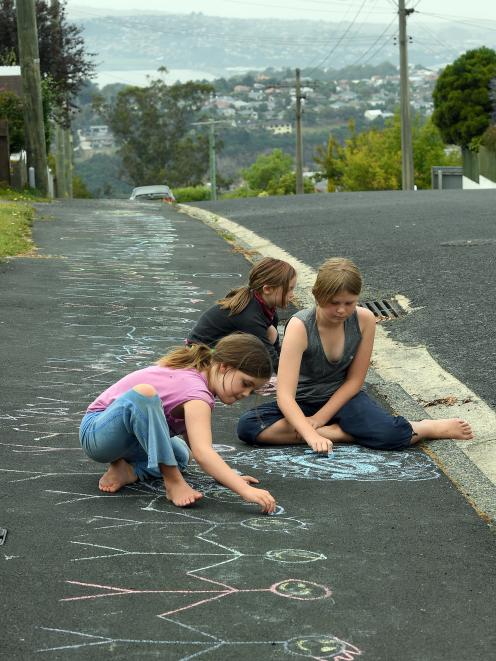 The Patterson sisters of Stratham St, in Brockville, (from left) Zoe (9), Erin (6) and Ada (11), have drawn a message to their neighbours, who they think were connected to the Christchurch tragedy. Stretching the well-walked route between houses of immigrant children and their grandparents are more than 200 smiling stick figures holding hands. Photo: Stephen Jaquiery
The grip of terror on Muslim pupils in Dunedin is so strong that the majority did not turn up for school yesterday - and a girl who did turn up declined to wear her traditional headscarf for fear of being identified as Muslim.

Brockville School principal Tania McDonald said her school had 28 Muslim pupils - many of them Syrian refugees - but only a third turned up for class.

''Some of them know the victims directly, so that's affected them quite a bit.

''They were scared to come to school, but they did come. Obviously, not all of our children have arrived - probably only a third of them have.

''One of them didn't wear her headscarf. She just wants to be like everybody else, which is very sad.

''But we've encouraged her to return to school with her headscarf tomorrow.''

To provide support for the pupils, she said the school had made contact with Red Cross victim support, and a social worker was now at the school working with pupils.

A special assembly was held yesterday morning, where the national anthem was sung and the situation was acknowledged.

''We also emphasised that right now, we need to be kind to one another.''

An increased number of staff would be roaming the playground during intervals and lunch breaks, and there was an increased police presence at Dunedin schools which had high numbers of Muslim pupils, she said.

''We're trying to create an environment where they feel safe.

''We've had it out on Facebook that our thoughts are with everybody affected, and we've opened up our library as a support centre for those that need it.

''We're really just waiting to gauge what our community needs and what our children need.''

She said the community had been very supportive and many had contacted the school asking what they could do to help.

Dunedin An-Nur Childcare Centre head teacher Rosy Jaforullah said only a handful of children turned up to the centre yesterday.

''We have a very low number of children here today because parents are so worried and scared to send them.''

She said the attack had been horrifying, but called on parents to be brave and return their children to a normal routine as soon as possible.

King's High School rector Dan Reddiex said the school had a large number of Syrian refugees and other Muslim pupils.

''The boys are a little bit emotional, but we've had a chat with them and they're doing OK.

''It's pretty challenging times for them obviously.''

He said the school's guidance counsellor had been in touch with them individually, to offer support, and staff were keeping an eye on them.

''We've also got a safe space in our ESOL room where those students can go if they want to talk or take some space, and there's some support offered there.

''And obviously, we've got the external support offered by the Ministry of Education.''

Ministry secretary for education Iona Holsted said support was being provided to schools, kura and early learning services across the country.

''This is a really tough time for New Zealanders and it's critical our children and young people get the support and care they need as they return to schools and other learning institutions.

''The Dunedin community has very close links to Christchurch and is badly affected.

''Our staff have met with the elders of the Muslim community to outline the support we have available.

''We will make daily assessments about ongoing additional resource requirements and will continue to provide support for as long as it's needed.''

Parents and teachers can help children and young people feel safe by.—