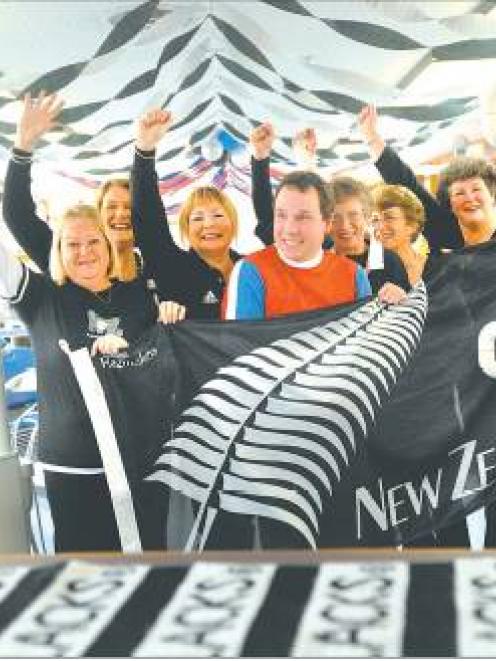 Wakari School staged a "black out" to support the All Blacks.

But in the assembly after lunch, the 16-strong French language group gave a stirring rendition of La Marseillaise.

The year 5 and 6 pupils, who sang with gusto, had been learning about the origin and meaning of the French national anthem.

The upper Octagon took on a European feel with members of the Otago cricket team donning berets and playing petanque against a foursome from Otago rugby.

It is hard to know what the French would make of the skills on display.

But it is fair to say former Warrior and Taieri first five-eighth Michael Witt is more comfortable with the oval-shaped ball in his hands.

The University of Otago Orthodontist Centre worked on winning smiles.

Dental assistant Claire Giles and the team brought some colour to the drab surroundings, decorating the clinic in streamers and flags.

Giles said the clinic underwent a black-and-white makeover last year when the Springboks were in Dunedin.

But with a French orthodontist on the staff, the team decided to put up some red, white and blue streamers as well as the black ones.

"We decided to keep a foot in both camps, to keep everyone happy," Giles said, although she is firmly in the All Black camp and predicting a victory for the home team.

Kathy Meikle had a relieved smile when she secured three seats in the Rose Stand shortly before the sold-out sign was put out before lunchtime yesterday.

Meikle made a spur of the moment decision to attend the game and paid $255 for the tickets.

It was more than she hoped but it was worth it for the atmosphere, she said.

"We came many years ago and the atmosphere was awesome. It is better than sitting at home [watching it]."

Meanwhile, in an effort to get behind Dunedin's new stadium, nude rugby participants will change venue from St Kilda beach to Logan Park this afternoon.

The annual Bottom Bus event is a seven-on-seven game in which players bare their natural talent.

General manager Ralph Davis said the event was "about having a bit of fun".

The change of venue was appropriate, due to the focus that had been placed on Forsyth Barr Stadium, and the company wanted to show it was "getting in behind" it.

Dunedin City Council events manager Marilyn Anderson was not concerned about the game being played in a more public area.

"It's always been considered a bit of fun. Besides, it's going to be so cold, no-one is going to get offended," she said with a laugh.

Kick-off will be at 3.30pm today at Logan Park, on the corner of Anzac Ave and Union St East.