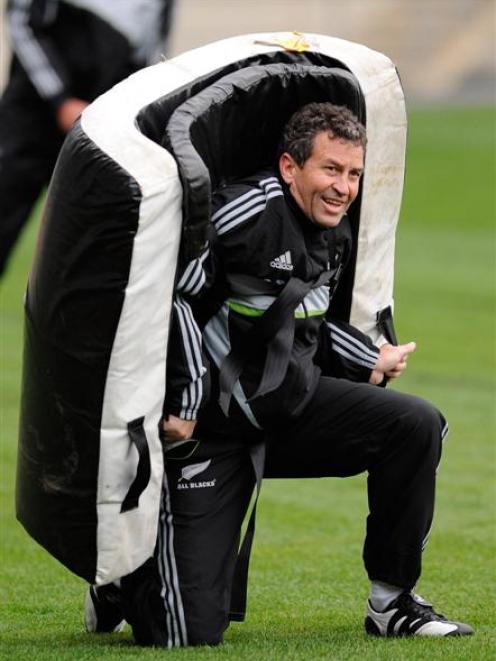 All Black assistant coach Wayne Smith gets involved during a team training session at Carisbrook. Photo from Getty Images.
Memories of 1994 are still deeply ingrained in the All Blacks' psyche as they prepare for the French test at Carisbrook on Saturday.

France won 23-20 at Eden Park that year to win the series 2-0, its first success in a series against the All Blacks.

It came from a glorious late counterattacking try by fullback Jean-Luc Sadourny when Stephen Bachop's kick to the corner failed to find touch and allowed the French to begin the historic counterattack.

All Black assistant coach Wayne Smith is concerned about the French counterattack.

"That's one of the challenges of this game," he said in Dunedin yesterday.

"Under new coach Marc Lievremont they have attacked a lot more than in the last eight years.

"They move the ball more and look dangerous. They have always been able to do this but they have been a bit too structured in the past few years. Lievremont has brought more variety to the French game.

"They were magnificent in the 1994 series. You have to be careful not to give them opportunities to counterattack like that. We have to kick accurately and also chase well."

The All Black panel is not letting the loss to France in the quarterfinal of the 2007 World Cup affect how they play the test on Saturday.

"We have worked hard over the last two years to re-establish this team and we are just continuing on with that," Smith said"I can think of losses during my career that if I let them consume me too much I wouldn't stay coaching."

Smith has let the loss at Cardiff go and moved on.

"What happened happened. We have got a different team. We went through all that last year," he said.

It is a new All Black team that will take the field at Carisbrook.

"I'd love to get off with a great start," Smith said.

"I know it will be hard, but it would be great for these guys who have worked hard to nail it to get a good performance under their belt."

Centre Isaia Toeava, who made his All Black debut against Scotland in 2005, is rated highly by Smith.

"He is a gold nugget with a lot of strike power," Smith said.

"We did a film clip of his highlights from the Super 14 and there were a lot of line breaks and brilliant plays."

The All Black coaching staff have put a lot of work into him over the last four years and it is now time for them to collect on their investment.

"I think we collected a bit last year," Smith said.

"Isaia played really well in the opportunities he got.

"It was just a matter of him growing up. He's a lot more competitive than he was in the old days. He is determined to do well.

"In the past, he was a bit too shy and didn't want to show up too much. He has now got that competitive edge to his game."

Smith feels that Toeava's best spot in the team would be at fullback or wing.

"But he has also played well at 12 and 13. Selection is dictated a bit by our needs," he said.

"Long-term, 15 is a position he could fill very well."

Smith did not think Toeava would be affected by the "utility" tag.

"I don't think it's an issue," he said. "He wants to play, and would rather be in another position than sit on the bench.

"We pick players who are multi-skilled and can play in different areas. Isaia has played all over the place. His goal is to nail the role he is in now."

Smith said that Stephen Donald, starting at first five-eighth in the absence of Daniel Carter, had earned his place in the team because of consistent play in the Super 14.

"He's got the form and the maturity," Smith said.

"He's got good character and I hope he is rewarded with a good performance.

"Stephen is ready. He has played some big games for us. He came on in Brisbane last year with 30 minutes to go and played his part brilliantly.

"We trust him and this is shown by his selection. He has been shown faith from us right through the Super 14.

"We expect him to nail it."

Donald is the only recognised tactical kicker in the starting line-up on Saturday and the coaching staff is aware of the need to have more kicking options and are working on it.

Ma'a Nonu has developed his kicking skills and he demonstrated this on a few occasions in the Super 14 for the Hurricanes.

"I thought he was the best 12 in the world last year and again in the Super 14," Smith said.

"He is a proven performer at test match level now."