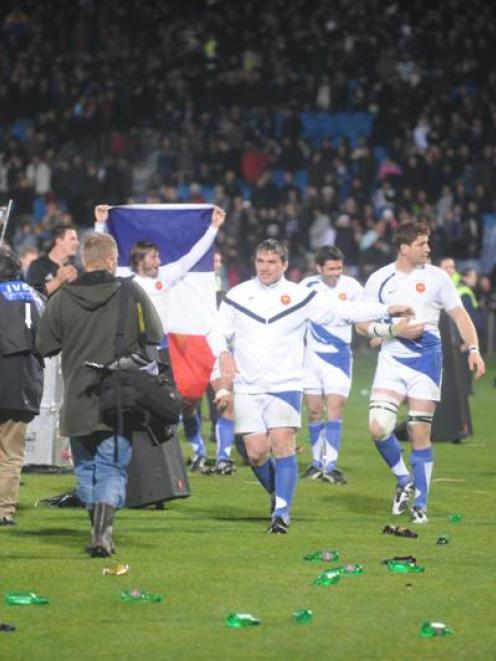 The French team are pelted with bottles as they celebrate their win at Carisbrook on Saturday night. Photo by Peter McIntosh.
French players are surprised and disappointed at the behaviour of Dunedin rugby fans who pelted them with bottles following last Saturday's test defeat of the All Blacks.

A spokesman told NZPA the team had laid no complaint with New Zealand or Otago Rugby Football Union (ORU) officials but lock Sebastien Chabal and first five-eighth Francois Trinh-Duc today said the players were stunned to have to dodge missiles as they celebrated their 27-22 first test win.

As a team they lapped Carisbrook to show their appreciation to French supporters, only to be showered with plastic bottles - most of them full or half-full - by the crowd on the terrace, which featured large numbers of students.

Some players reportedly had to duck or jump to avoid being hit.

"After the game they threw some bottles at us when we just wanted to say thank you to our fans," lock Chabal said.

"It was quite bizarre because normally the crowd is quite respectful but during the game they start to boo when our kicker was kicking."

The incident further dented the reputation of the Carisbrook supporters, who gained notoriety when they booed the All Blacks off the field following a narrow defeat of Ireland in 2002.

"We didn't steal this game. We had a good performance."

Such behaviour has the potential to jeopardise the ORU's goal of a test against Wales next year - quite possibly the last at the famous ground before the new Dunedin Stadium is scheduled to be completed ahead of the 2011 World Cup.

New Zealand Rugby Union (NZRU) professional rugby manager Neil Sorensen said such incidents would be taken into consideration when tests were allocated for next year.

ORU stadium and operations manager Coryn Huddy told The Otago Daily Times the incident "had the potential of marring what was a great event for the city and for rugby".

"It is a shame that the actions of a few people can detract from the game itself." Huddy said the union was "very unhappy" with the behaviour of a small number of patrons at Carisbrook "whose actions reflect very badly on our reputation as good hosts, and true rugby supporters, and on our national image internationally".

In February, the ORU replaced cans with plastic bottles for all beverages consumed at the ground, making Carisbrook one of the last major sporting venues in New Zealand to make the change.

Meanwhile, Chabal shrugged his shoulders and said he would accept another barrage after the second test at Westpac Stadium here on Saturday if it meant the series had been secured 2-0.

"If we win, they can throw what they like at us - it's not a problem."