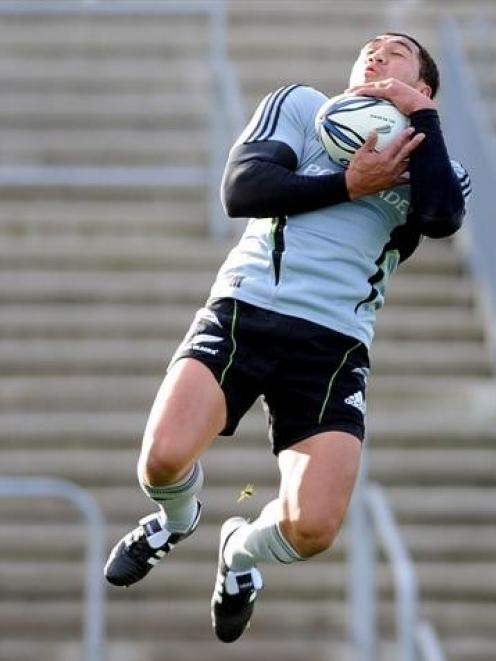 All Black skipper Mils Muliaina goes high to catch the ball at the captain's run at Carisbrook yesterday. Photo by Peter McIntosh.
The chance for revenge has been dismissed. Many of the stars will be sitting on the sofa or in the stand. It is one of the greenest sides to wear the All Black jersey.

But this XV still has one advantage that every All Black team has: the expectation of victory.

Going into tonight's first test of the season at Carisbrook against the French, the All Blacks know nothing short of a victory will suffice.

Forget about all the injuries, the player drain, and last-minute changes.

This All Black side must win tonight to show the rugby heart is still beating strongly in New Zealand.

The fear of failure still hangs over the All Blacks and that fact is not lost on on All Black coach Graham Henry.

He said yesterday, at a press conference, despite all the team changes and the chance to pay back the French for beating the All Blacks at the last Rugby World Cup, the main motivation was simply winning the game.

"We take every test match exceptionally seriously. That is the way we should take it.
he nation expects us to win and that expectation is great for the team and brings the best out of us," Henry said.

"Some people think: do we need that? But I think it is good for the team, good for New Zealand rugby, and we prepare accordingly. This test match is no different and it would have been no different if we had won in Cardiff or if we had lost in Cardiff."

Talk of revenge has not played out, as both teams have spoken about moving on and much of the personnel has changed.

That this All Blacks side is light on experience is a given.

Only six players return from the starting XV of the last test of 2008.

The loose forward trio is completely new and Adam Thomson, who had an excellent Super 14, albeit in the blindside flanker position, will have plenty of pressure on him when he wears the No 7 jersey.

Much will rely on the big-match experience of Brad Thorn, Andrew Hore and Tony Woodcock, who plays his 50th test.

Woodcock first rose to prominence five years ago, when he was part of a side which took apart France in Paris.

That game was the making of many All Black careers, and Mils Muliaina was another who came of age that day.

He will become the All Blacks' 64th test captain when he leads the side out tonight.

He is another who said the loss to France two years ago was irrelevant.

"I don't think of it that often. That is in the past. We have a totally different team and that was a long time ago."

Muliaina said he had had a relatively quiet week, and he had put it on other players to share the leadership role.

The role was more intensive than when he led the Chiefs, but he was focusing on doing his own job first.

"I've got to get out there and play well first and foremost. But running on to the field . . . there will be a time there when I reflect. It is going to be a special moment. Playing so close to Invercargill, where I grew up, and that in itself is going to be huge motivation for me."

Muliaina will have to help Cory Jane out on the left wing, with the Wellington flier called in yesterday, replacing injured winger Rudi Wulf.

Wulf was diagnosed with a small fracture in his left shoulder after a fall at training on Thursday and is out for about six weeks.

Lelia Masaga, who was pulled out of the customs area at Auckland International Airport, where he was on his way to Samoa with the Junior All Blacks, will be on the bench and may get his first start.

He has barely had enough time to fit his All Black jersey, let alone learn the moves, but Henry said he just wanted him to relax and play his natural game.

The forecast has improved for today and the weather is expected to be fine, with the chance of a southwest breeze.