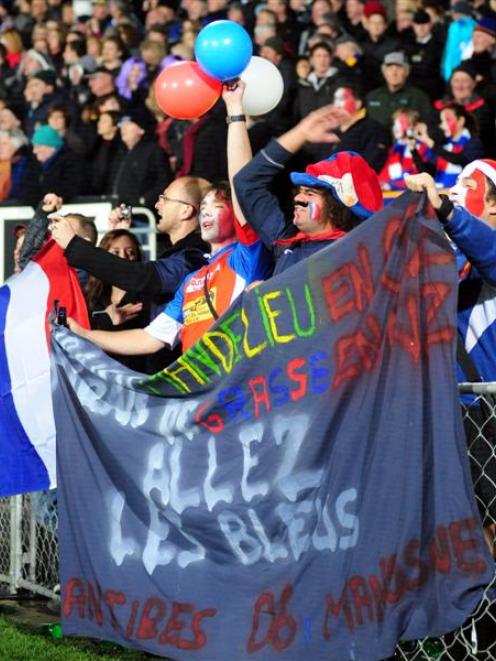 The figure comes from an economic impact report by consultant Andrea Howard, released yesterday, which studied where people who attended the test match came from, and how much they spent.

Economic development committee chairman Cr John Bezett said the results were "a good-news story" for the city, and had added value because of the ongoing discussion about the new stadium, and its effect on the city's economy.

"It shows this city can stage large international events of this nature," he said.

"If there's support at the old Carisbrook, there's a comparison one could draw, I'm sure - it would be even better at the new stadium."

The study showed $11.3 million was pumped into the economy from the test, with a total value added of $5.3 million, a figure Ms Howard said was closer to the "true value" of expenditure.

Her report said the sample size of the research was 308 people who had bought tickets to the match, and who were visitors for which the test was their primary reason for travelling to Dunedin.

The sample size meant there was a 15% plus or minus margin of error.

The council was also pleased with feedback from punters, with 93% agreeing the city was "warm, welcoming and hospitable" and 98% saying they would return.

There were some negative comments though, mostly about the poor behaviour of some members of the audience at the test, but also about the state of Carisbrook and the availability of accommodation.

Otago Rugby Football Union chief executive Richard Reid said problems with crowd behaviour would be a thing of the past once tests were moved to the Forsyth Barr Stadium.

At Carisbrook, it was difficult to identify people who caused trouble.

But the new stadium would have closed circuit television coverage, the seat number of people causing trouble would be identified, and troublemakers would be ejected as they were in other modern stadiums.

The report noted the economic benefits were lower than those from the tri-nations test against South Africa in 2008, when the total value added was $6 million, and the average outlay $511, something put down to the French team not being seen as top opposition for the All Blacks.

The study said about 44% of the audience was from outside the city.

The bulk of money spent was on food, drink, shopping and accommodation.

The economic boost from the test would create 126 full-time-equivalent jobs, though Ms Howard said that number was "theoretical".

Council chief executive Jim Harland said the test had made "quite an impact on the economy".

People had had a good time, and if another test was held, they would come back, he said.