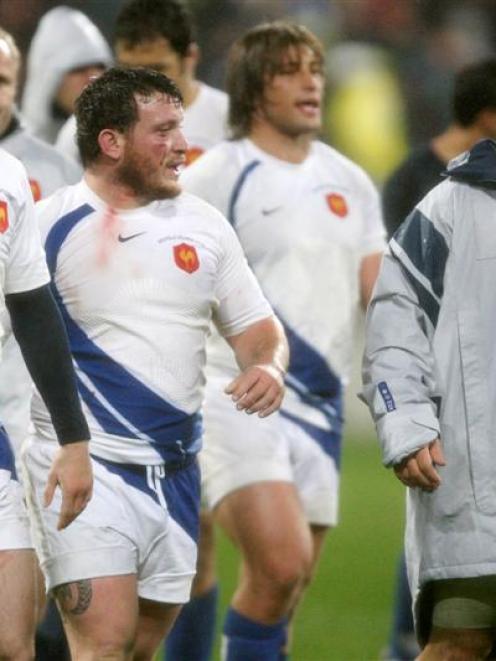 French players leave the field dejected after their loss against New Zealand in the international second rugby test at Westpac Stadium, Wellington. Credit:NZPA / Wayne Drought.
The All Blacks won the second test but lost the silverware after prevailing 14-10 over France in a titanic rugby arm wrestle here tonight.

An improved New Zealand forward effort proved the difference in a contest spoiled as a spectacle by freezing conditions and constant rain.

Victory wasn't enough for the All Blacks to retain the Dave Gallaher Cup, which goes to the French for the first time since the countries began competing for it nine years ago. The hosts needed to win by six points or more to keep the silverware on points differential.

Both teams scored a try each -- including one of the great individual test tries by French winger Cedric Heymans, who brilliantly evaded four defenders -- but the All Blacks were deserved winners through creating more chances and winning the all-important territory battle.

There was a vast improvement in the physical exchanges that let them down so badly in the 27-22 first test loss at Dunedin last weekend.

Seeking a repeat of the their 2-0 series triumph in New Zealand 15 years ago, France were a danger to snatch it via some unlikely counter-attacking in the second spell that defied the conditions.

Swirling wind played havoc with the tactical kicking game of both teams, along with shots at goal, where France managed just two from six shots and New Zealand three from six.

Openside flanker Tanerau Latimer industrious at the breakdown in his first test start for the All Blacks while fellow-loose forwards Kieran Read and Jerome Kaino were also strong, along with hooker Keven Mealamu and lock Brad Thorn.

Both sides struggled to string together any expansive play, with All Blacks first five-eighth Stephen Donald enduring an error-prone evening, finding himself replaced in the final quarter by Luke McAlister.

It wasn't until the 26th minute that either team launched a sustained attack, resulting in a try to All Blacks second five-eighth Ma'a Nonu. Surges from Kaino and hooker Keven Mealamu gained ground before Nonu doubled around winger Joe Rokocoko, who popped a sweet pass in the tackle.

They nearly had a second moments later when right winger Cory Jane crashed over in the corner but third match official George Ayoub ruled no try as he couldn't see a grounding.

Halfback Dupuy missed long-range penalties in the 33rd and 36th minutes before Donald discovered his radar on the stroke of halftime to put his team 8-0 clear.

Heymans had France were climbed within one point with a memorable solo try 3min after the break, converted by Dupuy.

Receiving the ball nearly halfway only 1m of space on the left flank, Heymans scooted around opposite number Jane, swerved past fullback Mils Muliaina and cover defending No 8 Kieran Read before stepping inside Rokocoko.

New Zealand launched several attacking raids but stout France defence produced key turnovers on their own tryline more than once.

Penalties became the preferred method of scoring from there, with Donald successful in the 55th minute and McAlister 10min later.

French replacement halfback Dimitri Yachvili slotted three points with 12min remaining but the only team who came close to scoring from there were New Zealand, when a bouncing ball slipped the grasp of Rokocoko near the tryline 2min from time.

The All Blacks host Italy in Christchurch on Saturday next week while France cross the Tasman to play Australia in Sydney.