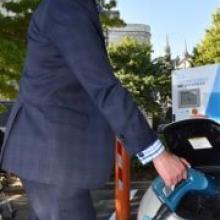 Dunedin Mayor Dave Cull was there to herald the development.

The installation "fits well with [Dunedin]'s reputation for innovation'', he said.

"I'm very proud ... I'd like to congratulate Delta for this initiative - they didn't have to do it.''

A row of electric vehicles lined one side of the Filleul St car park, waiting to be charged.

The charger can replenish most electric vehicle batteries to 80% capacity in less than 30 minutes.

Charging at Delta's station would be free for the first year, although car owners would have to pay the normal parking fee,

"As the local electricity infrastructure provider for Dunedin, we're committed to enabling the greatest possible use of emissions-free, renewable energy for transport in the city.''

At the opening yesterday, Mr Cull also took the opportunity to announce the Dunedin City Council would be providing its own electric car charger in the council's Great King St car park, in conjunction with the Chamber of Commerce.

Chamber chief executive Dougal McGowan said the new charger was sitting in his office, waiting to be installed.

"We're just waiting for a co-ordination around getting the contractors to put it in, as well as council staff to make sure all the safety stuff is correct.''

The charger was a slow charger, not a fast charger like Delta's in Filleul St, Mr McGowan said.

That meant cars would take longer to charge, but also meant it would be less of a burden in terms of electricity provision.

Installing the charger was "about the first stage of future-proofing our infrastructure needs and [energy] wants,'' he said.

Mr McGowan expected the charger would be installed in the next two weeks.

Attached to Blueskin Nurseries and Cafe, the station can charge a 300km-range electric car from empty to full in about five hours.