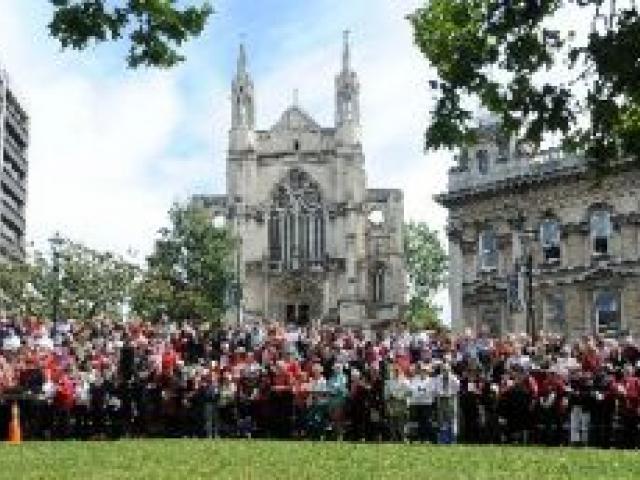 Some of the thousands who gathered in Dunedin's Octagon yesterday for two minutes silence after last week's Christchurch earthquake. Photo by Peter McIntosh.

It started with a prayer and ended with a song.

Dunedin's message of support to Christchurch was sent loud and clear yesterday as thousands gathered in the Octagon for two minutes' silence at 12.51pm, one week on from the devastating earthquake.

He spoke about how in Maori tradition, the land rumbles because a great chief has fallen, but in this case, it was mother earth who fell.

''Travel those spirits atop Banks Peninsula, look back on your village and your town, or out to the ocean to the places you have come from.

''It is appropriate that we release those spirits so that they may travel as one, leave behind those frail damaged bodies to rest in Christchurch,'' he said.

Standing strong in silence, in pictures

Dunedin Mayor Dave Cull told those gathered how ''incredibly proud'' he was of the community for how it had ''risen to the challenge'' of helping ''our big sister up the line''.

After the quake, he sent a message to Christchurch Mayor Bob Parker telling him to ''ask for what you need''.

In the days that followed, assistance from organisations and individuals helped the ravaged city.

From fundraising to offers of accommodation, students mobilising and Dunedin City Council staff travelling to lend a hand, aid flowed in a time of need.

On Monday, the city pledged a $250,000 fund, to be allocated as Christchurch's needs ''crystallise''.

An ''embassy'' has also been set up at the Dunedin Railway Station with agencies offering support to refugees.

Mr Cull's message to Christchurch remains the same as it did one week ago: ''We are with you. In these dark days, you will not walk alone and we will do whatever we can to help you and your community.

''We will do, we will give, we will offer and we will find whatever we can to support you.

''Send us your displaced, your homeless, your frightened and your traumatised.''

He promised this support would remain ''for the long haul'' throughout the clean-up, dislocation and reconstruction.

His speech was followed by the two minutes' silence and a moving rendition of You'll Never Walk Alone.