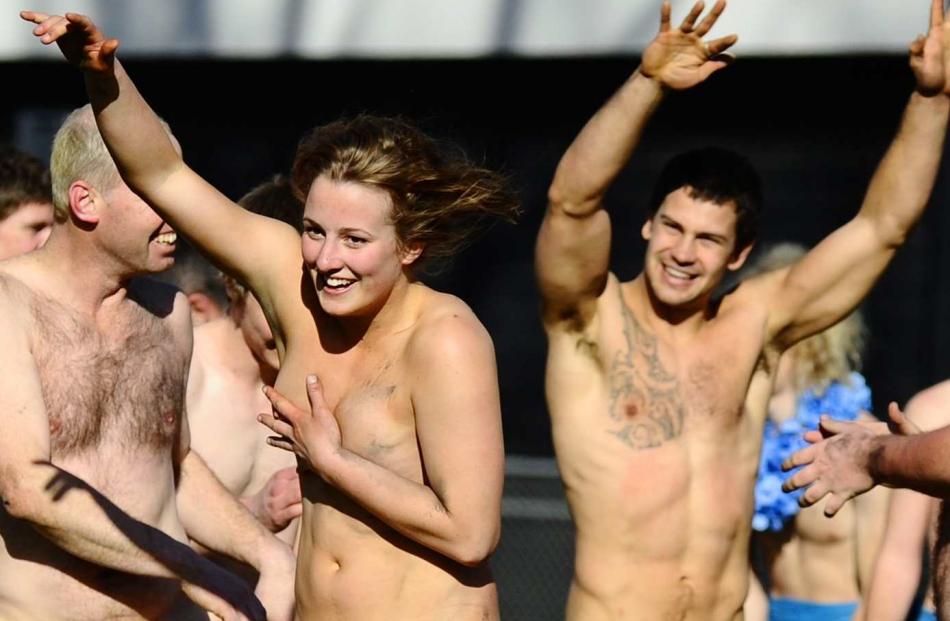 University of Otago student Rachel Scott (21) was the naked star of a television clip which attracted more than 4 million viewers when it aired in Europe this week. Photo by Gregor Richardson.

The Nude Blacks' winning streak has continued, with exposure in Germany, Switzerland and Austria.

More than 4 million viewers tuned in this week to watch footage of the team playing a Fijian invitational team in Dunedin last month. The Logan Park game was billed as the unofficial curtain-raiser to that evening's All Blacks-Fiji game, the final test played at Carisbrook.

The interest in the 3min 40sec clip has surprised the sole female player, Rachel Scott, especially being the focus of the television item, which included shots of her drinking as part of the pre-match warm-up.

The University of Otago marketing and clothing, science and textile student said she "had no regrets", despite initial concern how her family in Auckland would react to her public display of nakedness.

Ms Scott, who was named player of the day, said she was unsure whether she would turn out for the Nude Blacks again, but recommended the experience.

Apart from a few more people recognising her on the street, "life was the same as usual", she said.

Melbourne-based foreign correspondent Niels Büngen (31), who provided the footage screened by German Television channel RTL - the largest private network in Europe - said yesterday he came to Dunedin especially for the match after reading about it on ODT Online.

"I guess it was so popular because most of the people in Europe have never heard about anything like that before.

"Of course, it was even more successful because a girl played and was so brave to be out there with all the boys, spectators and TV crews," he said.

In addition to screening in prime time, the clip was the most popular on the network's website, attracting comments about why nude rugby was not played in Germany and that the players were crazy - but in a positive way.

Nude Blacks organiser Ralph Davies, of Bottom Bus, said the team's next game was likely to be about the time of Dunedin's opening Rugby World Cup match, between England and Argentina on September 10.

The overseas attention did not surprise him, as "there is massive media interest in the team".

He was conscious overseas media would be in New Zealand during the RWC, but did not want to "run [players] around in the nick just for the sake of it".

While the official games were the main focus of the Rugby World Cup, events such as the Baldwin St Gutbuster were expected to attract interest from the hundreds of media attending the tournament.