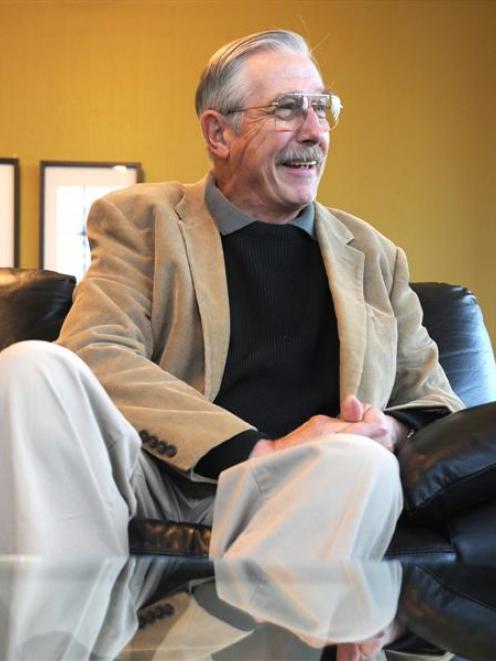 Ron Davis shows what life in control of dyslexia can be like. Photo by Peter McIntosh.
As a child, he was labelled a "dummy" at home and "mentally retarded" at school. By age 12, he was considered "uneducatable" by the American education system and he was functionally illiterate until he was 38.

Now, most people would not realise Ron Davis (66) has dyslexia and autism.

He is visiting New Zealand sharing his experiences of life with those conditions, and how his search for an effective treatment led him to create a globally recognised method for treating dyslexia.

Mr Davis spoke to more than 400 people at the University of Otago College of Education auditorium last night about his "experimentations and discoveries", and how he developed training procedures known as the Davis Dyslexia Correction Programme, which is changing special education and learning disability throughout the world.

His methods claim a 97% success rate in correcting dyslexia and related conditions such as dysgraphia, dyscalculia, attention difficulties and dyspraxia.

Mr Davis' research indicates dyslexia is a compound of simple factors which can be dealt with step by step.

He believes dyslexics have visual, multidimensional minds which are less predisposed to word-based thinking. This causes dyslexics to not easily recognise printed symbols, such as letters of the alphabet and written words, and to have difficulty with teaching approaches that emphasise phonics and phonemic awareness.

If control could be gained over perceptual disorientation by using simple mental processes, and language skills taught with methods adapted to picture thinkers, then someone who was dyslexic would be able to read and write without problems, he said.

"The programme was designed for me. The fact that it works for other people, especially children, is a bonus."

Despite being a successful engineer, businessman and sculptor, Mr Davis said one of his greatest achievements came at the age of 38 when he overcame the challenges of dyslexia and read his first book from cover to cover without struggling.

• Mr Davis will give another lecture at Queenstown Primary School tonight at 7pm.