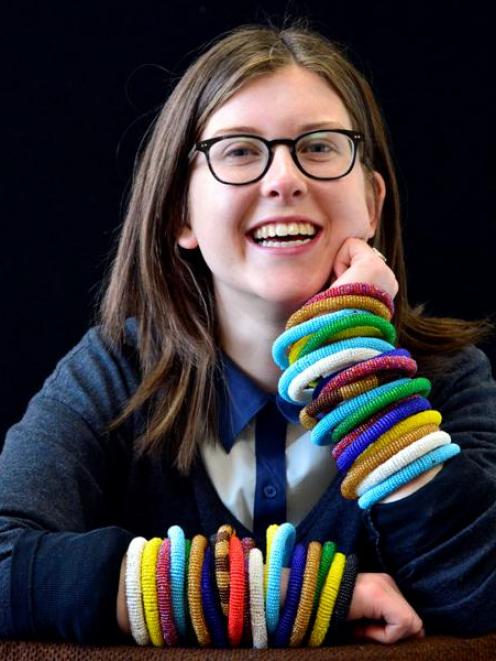 University of Otago student Alice Marsh is selling beaded bracelets handmade by Tanzanian widows to raise money for an orphanage. Photo by Gerard O'Brien.
A Dunedin woman's fundraising efforts are showing in the smiles of impoverished Tanzanian children, struggling to afford food and education "a world away".

The third-year University of Otago law and neuroscience student volunteered at a locally operated non-government organisation, teaching orphans English and basic science and looking after the 20 children housed on site.

The not-for-profit organisation was established in 2007 and aimed to reduce poverty by providing food and basic education to children, helping widows with HIV and running micro-finance groups to stimulate self-sufficiency.

Bracelets made by widows using beads supplied through Tamiha was one such example, Miss Marsh said.

She bought 100 of the colourful creations, which she was selling in Dunedin for $20 each, every cent of which went to Tamiha via international bank transfer.

Miss Marsh kept in contact with the organisation's volunteers, who sent her photographs of food and other items bought with the money.

Tamiha was run by a handful of dedicated Tanzanian volunteers, who ensured all funds were directly used to feed, educate or otherwise assist needy locals, she said.

Without such help, most Usa River residents had little chance of success, Miss Marsh said.

"It's honestly another world; there are so many children begging on the street. I want to help them and the people at Tamiha are so honest and sacrifice so much for their community. They work voluntarily, every day from 8am to 10pm."

The annual cost of public education in Tanzania was about $US600 ($NZ750) per child, so most went without, Miss Marsh said.

"Food is also really expensive, and the Government doesn't give orphans any financial support."

Those wanting to buy a bracelet through Miss Marsh could get more information from the website www.facebook.com/circlesoflifetanzania.

She had already sold 30 bracelets and planned to speak about her experience at Dunedin secondary schools, where she hoped to sell more.