Egg numbers soar but could be cause for concern 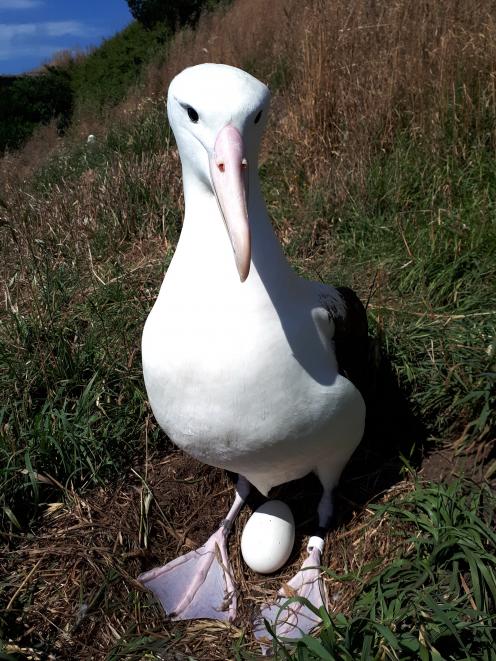 An adult albatross stands over an egg at the Royal Albatross Centre during a record laying season. PHOTO: DOC
With the thrill of record albatross egg numbers at Taiaroa Head could come a "concerning'' lopsided breeding schedule.

Yesterday the Department of Conservation announced a record 51 eggs were found at the Royal Albatross Centre this season.

Otago Peninsula Trust marketing manager Sophie Barker said it was a "huge record'', up from the previous high in the ``mid-30s''.

Because many eggs failed last year, a large breeding season was expected, but the centre was thinking "in the 40s somewhere'', she said.

There was the possibility of one more egg.

If the eggs hatched successfully there might be an unintended impact of lopsided seasons, as albatrosses bred every two years.

"From the tourism point of view it's concerning because there will be less for people to view. Although it may sort itself out. Maybe all those teenagers will come back and start breeding.''

Until last year the seasons were "fairly even'', she said.

For the last five years there had been an average of 30 to 35 eggs laid a season.

In a statement, Doc ranger Jim Watts said the department was "excited'' with each new egg found and it hoped for a "great rate of hatching success to make up for last year's poor season''.

Of 33 eggs last year, only 13 chicks fledged because of unexpected continued heat.

"We know some eggs will be infertile and one egg was found broken in its nest. While we can expect other challenges such as early embryo deaths, we're still hopeful this will turn out to be our best breeding season yet.''

The department's webcam will be moved closer to a nest within its cable's range in the next few days so hatching progress can be live streamed.

In the last few weeks the centre replaced its irrigation system used to cool the birds on hot dry days so pipes could deal with extreme weather conditions.

It also had new egg-candling and supplementary feeding equipment to improve albatross management.

It has installed two new incubators to replace the ageing single unit at the colony.

Chicks are expected to hatch mid-January.