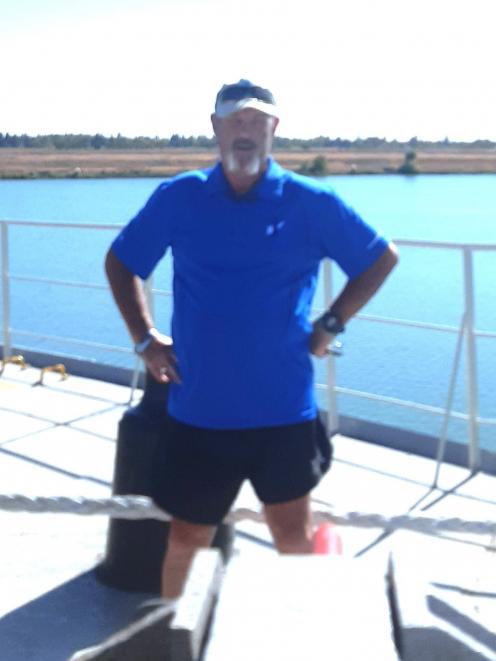 Mariner Bruce Blackburn, stuck aboard a ship and unable to get home to New Zealand. PHOTO: SUPPLIED
A Southern sailor has been stranded at sea for more than 100 days, unable to get back to New Zealand because he cannot obtain an emergency quarantine spot.

Bruce Blackburn, a fumigator/technician who trains crews how to treat their vessels, took a contract in May to fumigate logs on a vessel bound for China.

The ship was meant to return to New Zealand, but its Japanese owners decided to dispatch it on a circular route between Vietnam, Thailand, the United States, Canada and then back to China.

Mr Blackburn has remained an unplanned and unwilling passenger, unable to get off because of visa issues and the uncertainty of whether he could actually get back to New Zealand.

To make matters worse, in June Mr Blackburn injured his back and has been unable to obtain proper treatment for a prolapsed disc.

He has made multiple requests for an emergency managed isolation and quarantine allocation on medical grounds, both for the disc issue and for other pre-existing health issues, but has been knocked back each time.

‘‘I am a teacher, a critical person, but I still can’t get off and come home,’’ Mr Blackburn said by email aboard MV Ken Rei .

‘‘I explained to MIQ I was at sea without help and they didn’t really care.’’

In an email to Mr Blackburn in August, a Ministry of Business, Innovation and Employment (MBIE) employee said while she appreciated he was dissatisfied with the government department’s responses, ‘‘I have been clear that we cannot provide the outcome you are seeking.’’

She added MBIE would not respond to further emails from Mr Blackburn on issues it considered closed.

Mr Blackburn was far from impressed, saying ‘‘I have no idea when I can get back.’’

The former Otago man, now of Rolleston, has since emailed a range of officials from the Prime Minister down, as well as contacting a lawyer.

‘‘Can someone tell me why a bunch of cricketers without any medical issues are more entitled to an emergency MIQ room than a person who actually has a valid injury, that treatment in New Zealand can fix, but that there is no way it can be sorted on a ship?,’’ he said.

However, his pleas look set to count for nought as MBIE is adamant that Mr Blackburn does not qualify for an emergency MIQ spot.

Those included that the person needed time-critical medical treatment scheduled in New Zealand or unavailable or inaccessible in their current location, or were in a location or situation where there is a serious risk to their safety and their only option is to return to New Zealand.

‘‘These decisions are not easy ones to make and we are sympathetic to the distressing situations people applying for an emergency allocation are in.

‘‘However, we need to balance each individual application with our critical work to ensure the safety of all New Zealanders and the limited available capacity in managed isolation facilities by sequencing beds as they become available.’’

"‘‘Can someone tell me why a bunch of cricketers without any medical issues are more entitled to an emergency MIQ room than a person who actually has a valid injury, that treatment in New Zealand can fix" pretty much, this whole "MIQ" has been a balls up from the get go.

He should have told them he was a rugby player....he'd have been straight in!

Spot on! The only available categories for emergency MIQ appear to be: very rich; sports person; or film crew.