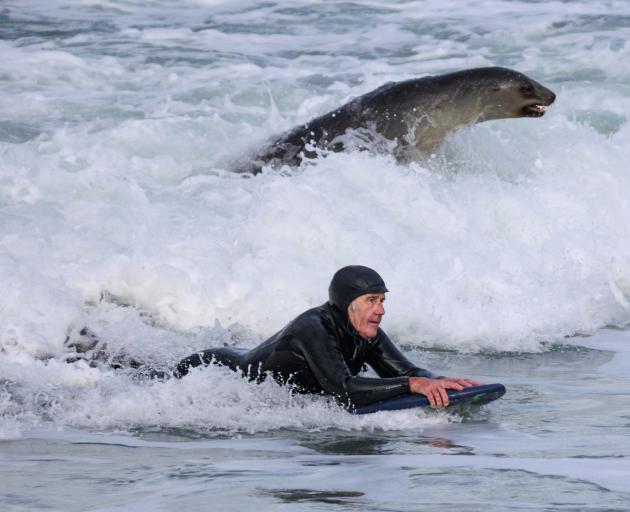 A friendly sea lion comes into shore alongside local surfer Mike Farrell at St Clair Beach yesterday morning. PHOTO: LLOYD PALMER
Dunedin's wintery weather was not enough to stop a pair of sea-loving locals from getting among the waves yesterday.

While the sight may seem typical at St Clair Beach, it was made a bit more unusual by the fact one was wearing a wetsuit, while the other was covered in fur.

Local surfer Mike Farrell was out in the waves with two friends when a sea lion decided to join them.

The creature was a regular at the beach and was known to play.

Unfortunately, there were times where it was almost too friendly, he said.

Although he knew it would never attack anyone, the sea lion would go under the board, zip around while he was trying to surf and at one point yesterday took a little chomp at his foot.

The 69-year-old man had been surfing at St Clair since he was a teenager and had witnessed the increase of sea lions over the last 20 years as preservation efforts increased.

"You know they don’t want to hurt you."

Despite the animal’s intention to play, navigating a sea lion did not make for enjoyable surfing, Mr Farrell said.

He decided to head back to shore, which was when the pair were snapped together.

The shot was taken by Lloyd Palmer, who was at the beach testing a new lens.

Mr Palmer believed he had captured a shot of a surfer coming in alongside a bundle of seaweed and did not think much of it.

However, when he got home and transferred his files to the computer he realised the seaweed was actually a sea lion.

He had always wondered how some photographers managed to capture nature shots which seemed to be timed just right, but now had a better idea.

New Zealand Sea Lion Trust chairwoman Jordana Whyte said while there were no identifying features visible, the sea lion was likely to be Doris, a 2- to 3-year-old who was friendly with the local surfers.

Most of the surfers enjoyed her company, once they realised she was just there for some fun, Ms Whyte said.

This year Dunedin sea lions had the most successful breeding season since the species returned about 30 years ago.