Dunedin Dahlia Circle president Wayne Burgess, of Waikouaiti, holds the joint winning entries in the champion vase open section. At left is a dahlia ‘‘miniature ball’’ called Jomanda, grown by him and his wife, Donna, and at right a dahlia, small semi-cactus called Embrace, grown by John and Jeanette Cuthbertson, of Hinds, at the Summer Flower Show at Forbury Park on Saturday.
Greater interest in "growing your own" was reflected in a doubling of fruit and vegetable entries at the Dunedin Summer Flower Show over the weekend.

Show manager and keen gardener Neil Judd was delighted with the increase in fruit and vegetable entries, and in several other categories, but the show’s overall 473 entries was down a little from more than 500 last year.

That was because recent adverse weather had reduced some of the flower entries, particularly the dahlias, Mr Judd said.

"It’s part of the joy of growing—there are these challenges.

"What grows well one year won’t necessarily grow the following year," he said. 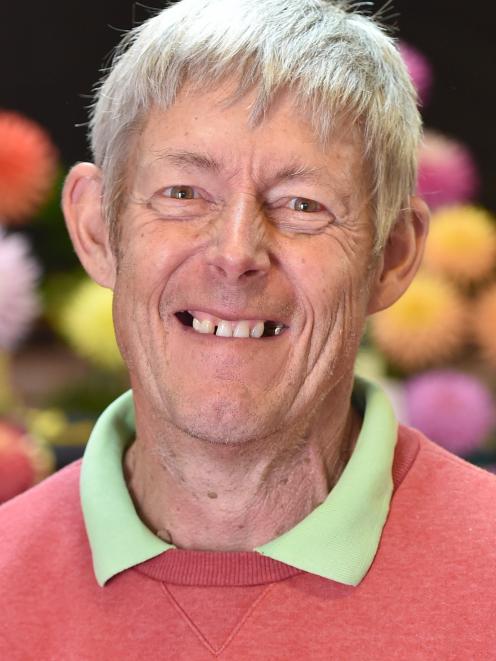 Dunedin Summer Flower Show manager Neil Judd, who has been gardening for more than 40 years. PHOTOS: PETER MCINTOSH
"I’m greatly encouraged because if people are bringing them to the show it’s like the tip of the iceberg — there’s more likely being grown out there."

"People are starting to realise that growing their own fruit and vegetables and flowers has advantages over buying them at the shop," he said.

The flower show was held over the weekend, at the Forbury Park Raceway, and was organised by the Dunedin Horticultural Society in association with the Dunedin Dahlia Circle Show.

Mr Judd, the society show manager, said fruit and vegetable entries were up to 38, from about 20 last year, and there were also positive rises in cacti and succulents (48, up from 15 last year), in 23 pot plant entries (10 last year), and preserves 19 (2).

Although both families and gardens were now somewhat smaller than they were 20 or more years ago, the fruit and vegetable entry rise reflected a growing desire for people to know where their food was coming from, and how it had been grown.

"And there seems to be a growing interest in community gardening."

More pleasure could be gained from growing one’s own produce, and although organic pest control methods required more manual effort, they reduced the amount of chemicals being used in food production.

There seemed also to be higher interest in participating in community gardens, and gardening brought many benefits.

These included being out in the fresh air, being closer to nature, and gaining support from advice from fellow gardeners.

Such mutual support, company and social communication was good for mental health and had been long provided by the horticultural society, and by other gardening groups, he said.