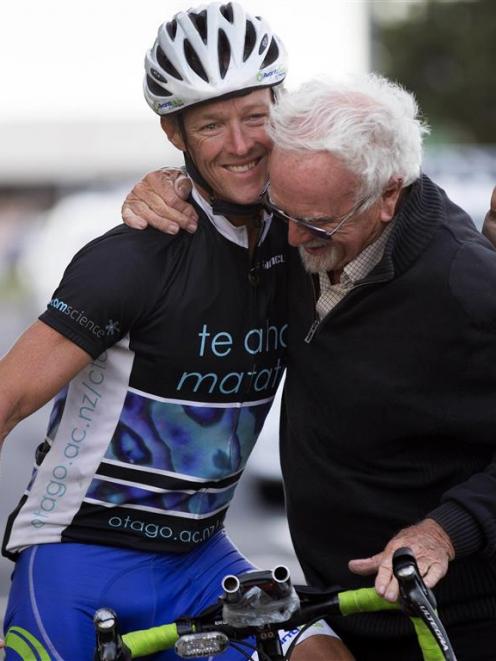 Dunedin man Andrew Nicholson, who had cycled around the globe in 123 days, is congratulated by his father, Peter, at Auckland International Airport last night. Photo by NZ Herald.
You would think a man about to set a Guinness world record for cycling nearly 29,000km around the globe in less than 125 days, would be ecstatic.

The 45-year-old had cycled around the world to raise money and awareness for the University of Otago's Te Aho Matatu: Centre for Translational Cancer Research, and was dismayed he had only raised $3813.

‘‘For the scale of the achievement, the funding wasn't as much as it could have been.''

However, he was grateful to those who had taken time to contribute to his cause.‘‘

Every cent counts and we're incredibly grateful for what we've raised.

‘‘My job was to cycle around the world and raise awareness for cancer research. Any extra money was a bonus.''

He said people could continue to go online and make donations at: givealittle.co.nz/cause/teahoworldride/

The funds raised would go towards research that accelerates the development and testing of new drugs and diagnostic tools that directly assist clinicians and their patients.

Mr Nicholson was inspired to make the journey after the death of a friend from cancer.

He has had to dip into his own pocket for air fares, and has stayed with friends along the way.

The trip started on August 12 when he flew from Auckland to Vancouver.

From there, he cycled across Canada and the United States, through Europe to India and through Southeast Asia, across Australia, then the length of New Zealand back to Auckland.

Mr Nicholson completed the 29,179km ride in 123 days, one hour and six minutes - about two days faster than the Guinness world record.

However, it could be several weeks before his achievement is officially recognised as a Guinness world record.

‘‘I feel a sense of relief now that it's over. The body needs a rest. I'm very glad not to be riding tomorrow, but the legs will probably twitch and want to go anyway.''