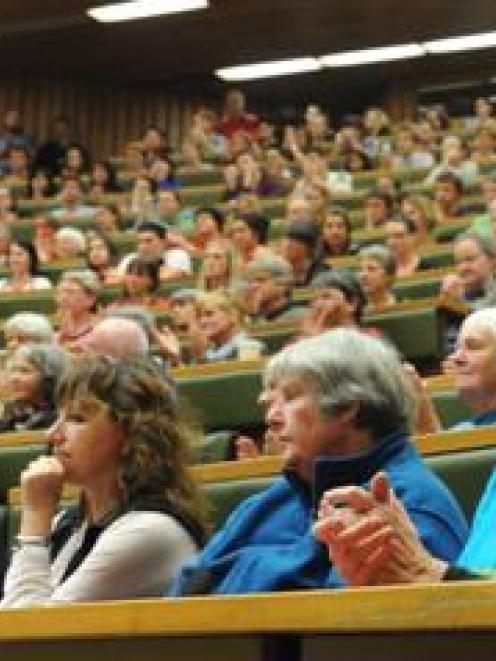 Prof Davison, a South African-based scientist, was convicted in October of aiding the death of his 85-year-old terminally-ill mother, Dunedin doctor Patricia Davison, in 2006, after a trial that sparked debate on voluntary euthanasia in New Zealand and South Africa.

Earlier this week, he completed five months' home detention to which he had been sentenced after admitting a charge he "counselled and procured" his mother to commit suicide.

Ms Street and Prof Davison were among panellists who last night addressed more than 300 people at an open public form in Dunedin, which focused on "Euthanasia and Assisted Suicide: A Discussion We Need to Have".

Her proposed Bill will include protective measures, including assessments by two physicians, to prevent any abuse of terminally ill patients' wish to have their lives ended, she said.

Prof Davison, a New Zealander who will return to South Africa this week, told those at the meeting it was "a great pleasure to be here but an even greater pleasure to be a free man".

With the ending of his home detention, he had been having a "dramatic and traumatic" time, and he emphasised his love for Dunedin and its people.

His mother, who had chosen to end her days at her Broad Bay, Dunedin, home had been facing a "dreadful, dreadful situation", after remaining alive despite refusing all food for many weeks.

"I believe any humane person would have done exactly the same thing [I had done]," he said.

Any debate about legalised euthanasia was premature until genuine equality of medical care had been achieved, he said.

Panellist Prof Grant Gillett, of the Otago Centre for Bioethics, warned of the dangers of a doctor becoming "isolated" or "drawn into the circle of despair" involving a terminally ill patient.

"We can make sure that death does not happen in a way that a person would hate it to," he said.

The two-hour forum, organised by the University of Otago's Centre for Theology and Public Issues, was chaired by Prof Paul Trebilco, of the Otago department of theology and religion.