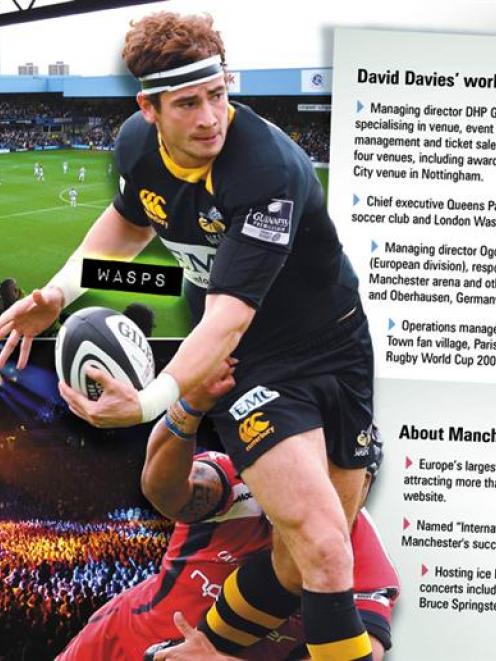 The Welshman head-hunted to manage the Forsyth Barr Stadium says Dunedin is yet to realise the pulling power of the new venue.

David Davies (50) was yesterday named as the chief executive of Dunedin Venues Management Ltd, the company formed by the Dunedin City Council to run the stadium and other ratepayer-owned venues.

Mr Davies is expected in Dunedin next month to take up his new role, which was confirmed after a four-month international search, consideration of 92 candidates and shoulder-tapping by recruitment company Sheffield.

His CV includes roles as chief executive of the Queens Park Rangers football club, London Wasps rugby club, concert promotion and control of the Manchester Arena - the largest indoor arena in Europe, with space for 21,000 people - and, most recently, managing director of DHP Group, specialising in the management of bands, venues and events, including up to 700 concerts a year.

He said he had been lured to Dunedin by the excitement offered by the new role, which would involve marketing and co-ordinating the city's new stadium and other venues, including the Dunedin and Edgar Centres.

Asked yesterday what he believed the pulling-power of the stadium would be, Mr Davies summed it up in one word: "Big."

"I don't think, locally, people have quite understood the economic impact a venue of this nature is going to have on them."

As well as professional sports - based on the Highlanders rugby team as an anchor tenant - he was confident the stadium would lure top international acts that would make people "sit up and take notice".

He struck a conciliatory tone when asked about opposition to the stadium, saying he was prepared to meet critics and discuss their concerns.

Mr Davies travelled to Dunedin in September as part of the recruitment process.

Mr Chin said the council had found the right person for a "critical appointment", while Sir John said the company was fortunate to secure his "very considerable" skills.

Nobody at the press conference would confirm Mr Davies' salary, and, when asked, Mr Davies would say only he was to be "appropriately rewarded".