Exit-only at Gardies after test kicks off 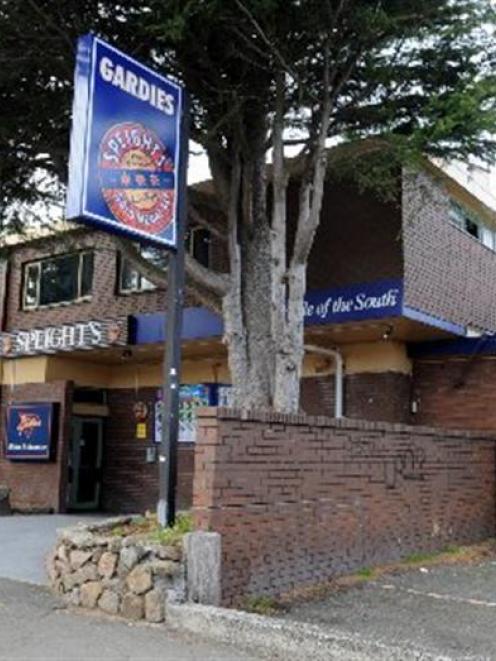 The Gardens Tavern in Dunedin. Photo by Peter McIntosh.
A no-entry policy at Dunedin's Gardens Tavern after the rugby test starts will help avert trouble as the "iconic boozer" prepares to close its doors later this month, says pub owner Pete Innes-Jones.

City leaders and police fear the student haunt's farewell, coupled with the night's All Blacks v Wales test match, might be a catalyst for disorder rivalling last year's Undie 500.

Mr Innes-Jones said those genuinely farewelling the Gardens Tavern, known as Gardies, would have done so by the night of June 19.

"Anyone who rolls up there at 10 to 11 o'clock is there for more than a drink at an iconic old boozer such as this.

"All the reminiscing will be done by then."

Mr Innes-Jones said the no-entry policy from around the time of kick-off, about 8pm, might be subject to change if the night was quiet.

No special party or pricing would mark the last night of trading.

The risk of students piling in before kick-off would be prevented by the pub's maximum capacity of 550.

He would shut the doors before that point anyway, rather than have the place "chocker".

Revellers might congregate outside, but in reality may get "bored".

The Dunedin City Council this week approved a police request for a temporary liquor ban covering much of North Dunedin from June 18-20.

Mr Innes-Jones did not expect to see a student "sit-in" throughout the day, as most liked to take advantage of cheap liquor deals from supermarkets.

Extra security would be on hand if there was trouble.

While reserving his right to trade for the night, Mr Innes-Jones did not wish to "fuel stupidity".

The All Blacks v Wales test match, the last at Carisbrook, was a great event for the city.

Anyone out for a good night should seek out the "magnificent" Welsh supporters and have a drink with them, Mr Innes-Jones said.

The great majority of students were good natured, but student events were a lightning rod for outsiders, many from small Otago centres.

Ideas considered this week by the Dunedin City Council of funneling students to alternative events were "naive", Mr Innes-Jones said.

Expecting students to go to organised events was "silly", especially the proposal for a University of Otago event, as the university was seen as spelling the pub's demise.

Of last month's sale, the university was the only "credible" buyer; talk of students banding together to buy the pub bemused Mr Innes-Jones, as his phone "went cold" during that time and he did not hear from anyone with such a proposition.

Owning a pub was a tough game as the supermarkets had the whip hand with aggressive discounting and no need to take responsibility for resulting bad behaviour.

Up to 90% of his bouncers' time was spent dealing with behaviour caused by cheap off-licence liquor, he said.

The policy might discourage revellers heading to North Dunedin after the rugby, opting instead for the city centre.

However, police were preparing for a large number of people in North Dunedin on June 19.

Gardies' finale was bound to attract both students and former students to the area.

"And we're praying for rain - a downpour would be excellent."