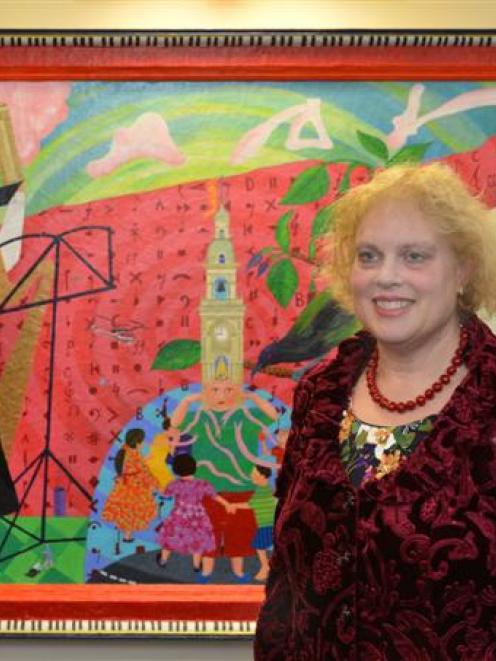 Artist Nicola Jackson (left) and donor Megan Griffiths at the unveiling of As Music to Attending Ears in the Dunedin Public Hospital yesterday. Photo by Peter McIntosh.
A man of words has left a colourful visual legacy to Dunedin.

A painting donated to the Dunedin Public Hospital collection yesterday, As Music to Attending Ears, combined the late writer George Griffiths' love of art and music.

''I wanted it to go somewhere the people of Dunedin could enjoy it,'' Mr Griffiths' daughter, Megan Griffiths, said at the unveiling yesterday.

''It was too big to move it to my new home and I couldn't bring myself to sell it. Although, I did have a few offers to baby-sit it.''

Mr Griffiths died on January 29, aged 80, after a long career as a publisher, journalist and historian.

''I feel very proud and very happy to see it here. I was absolutely stunned by it when I walked into the hospital foyer and saw it. It is for the people of Dunedin. There are so many Dunedin icons in it,'' Ms Griffiths said.

''I lived with it for several years and I was always seeing new things in it. I like how it's been hung down low, so kids can see it.''

The painting was completed between 2002 and 2003 by Dunedin artist Nicola Jackson.

''George commissioned the work and gave it the title,'' Jackson said yesterday.

''It would be the biggest painting I've done.''

Mr Griffiths worked for the Evening Star and Otago Daily Times from 1962 until his retirement in 1991.