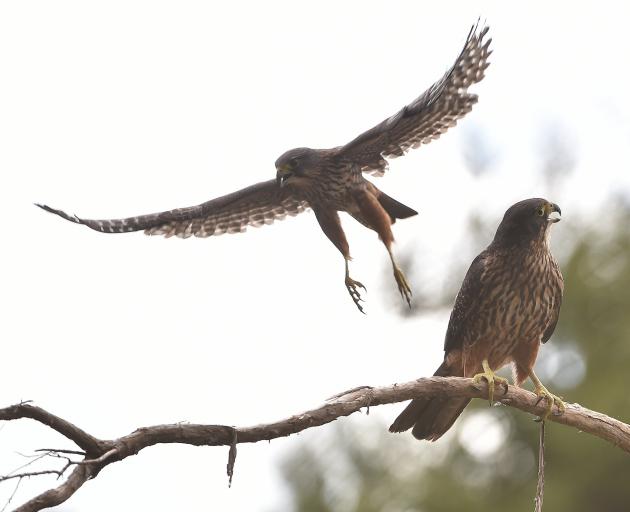 Falcons by a forestry block near Taieri Mouth. Photo: Peter McIntosh
Dunedin's population of falcons appears to have found a new home in the city's pine plantations as the threatened species adapts to new conditions.

Research has discovered a ''robust'' population in the forests.

Parker Conservation partner Graham Parker said the results of a three-year study showed there were an estimated 40-plus pairs of falcons, or karearea, living in the Dunedin area.

Mr Parker said 28 pairs had been found in the pine forests.

Conflict between forestry operations and the falcons needed to be dealt with, something that would be the focus of more research planned this summer.

The research was funded by forestry companies Wenita, City Forests and Rayonier-Matariki, and the Otago Regional Council.

When the research started, little was known about the birds nationally, despite them having the same conservation status at the time as yellow-eyed penguins.

Falcons nest on the ground, and are vulnerable to predators such as stoats, ferrets and feral cats.

They are also shot as pests, or electrocuted by power infrastructure.

Hunting, sometimes illegal, took place in the forests, and roaming pig dogs were a problem.

The objective of the research was to estimate the number
of breeding pairs, nesting
success, survival rates and
how to mitigate conflict with forestry operations.

Mr Parker said conservationists and those interested in birds had not been aware of the numbers, ''largely because they were not in the habitat we were looking in''.

That was because people venturing into the outdoors were less inclined to go for a walk in a plantation forest.

Historically, the birds' habitat was areas like tussock grassland, or native forest.

''It's only in recent years we've been finding them in plantation forests.''

They were inclined to nest in the forest slash, tree debris left after forestry operations, near the edge of the forest.

Mr Parker said it was thought chicks raised in plantation forests were then seeking native habitat.

The work planned for this summer was to find out more about dealing with the conflict between forestry and falcons, work forestry companies supported.

There had also been problems with recreational and dog walkers disturbing the birds, particularly on Flagstaff.

''We're trying to work out how to manage some of those issues.''

A lot of the steeper hill country used for forests in coastal Otago would be marginal sheep farm if it was not in forestry, which would not be conducive for falcon nests.

''The forestry is really creating habitat that didn't exist before.

''Species can learn to adapt to a degree, and the falcons are one of those.''