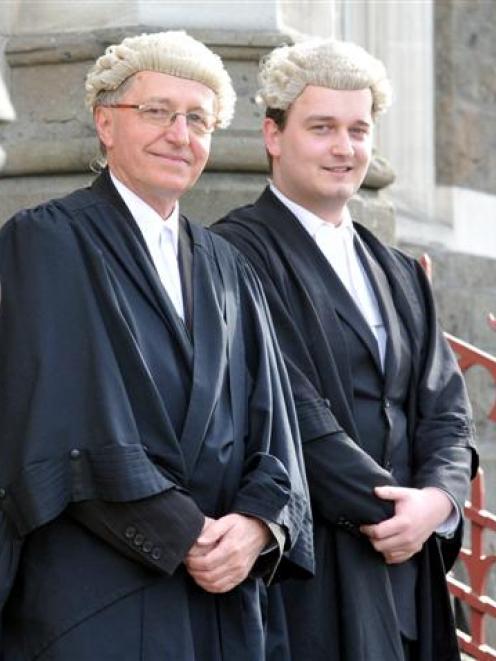 Lawyers Alex Pohl and his father, John, after the Bar admission ceremony at the Dunedin District Court yesterday. Photo by Craig Baxter.
Trust your instincts and your training and show courage, Justice Graham Panckhurst told new lawyers admitted to the Bar in Dunedin yesterday.

Ten lawyers were admitted to the Bar in a ceremony at the Dunedin District Court yesterday, including Alex Pohl (23), who was moved by his father, Wellington-based John Pohl, who is counsel for the Ombudsman's Office.

''It's the end of a long journey. Caps off all the study and the start of my career,'' he said.

Justice Panckhurst said the lawyers were now entitled to appear in all courts in New Zealand.

''Admission is a significant step and represents your rite of passage into the practice of law.''

Taking inspiration from a medical school graduation talk he had heard, Justice Panckhurst told the lawyers the occasion might arise where they had to make a judgement call when there was no simple answer or time for reflection.

''Do have courage and trust in your training and instincts.''

A career in law should be immensely satisfying as lawyers had the privilege of dealing with and advising others in many spheres, had receptive colleagues and, while there were routine days, there was always a challenge, ''probably when you least expect it'', he said.