Family struggling to find a home 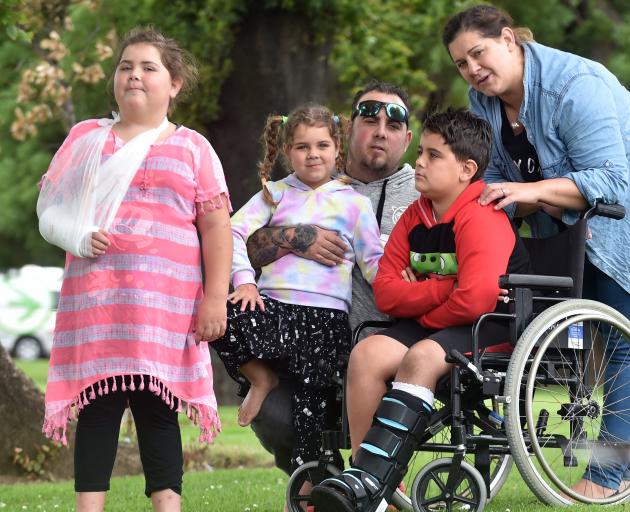 The Patterson family (from left) Mikaela (7), Paige (5), Jaimie, Shaye (9) and Jacinda have had a tough time finding a rental property they can afford. PHOTO: PETER MCINTOSH
A Dunedin family of five is emotionally exhausted after being left homeless and struggling to find a rental property it can afford.

Jaimie Patterson said the struggle to find a rental property was so great that when they left their Tainui house 10 days ago they did not have another one to move into.

They shifted to a camping ground and then two separate motels, supported by the Ministry of Social Development, while visiting rental property after rental property in the hopes of signing a lease.

``When we visit rental properties there is either tenants still living in there, so there is a wait, or else there is so much competition.''

With the family supported by his wife, Jacinda, who worked 35 hours a week at not much above minimum wage, this was more than they could afford.

The situation was complicated by their daughter Mikaela breaking her arm falling down stairs last week and their son Shaye being in a wheelchair after breaking his leg on Christmas Day.

This was not helped by the fact the motel room they were staying in last week was up some stairs, making it difficult to get Shaye to their room.

The uncertain situation had left them incredibly stressed.

When they did find a house and signed up for a lease, a credit check, which they disputed, meant they were turned down at the last hurdle.

After this, stress levels boiled over and they staged a sit-in at the property management company's office in order to get the letting fee and bond back, only to be moved on after police were called.

Mrs Patterson said the situation had left her so shaken she had taken sick leave from her job and was regularly in tears.

``I'm just going through all the motions because you have to,'' she said.

Yesterday they were consid-ering signing up for a rental property in Forbury Rd which was going for more than
$400 a week.

MSD southern regional commissioner John Allen said it had made ``every assistance available'' to Ms Patterson and her family while it helped them find a suitable house.

``While motels are not our preferred option, our priority is on ensuring that people have a warm, dry and safe place to stay.''

A shortage of accommodation over Waitangi weekend made this difficult.

``We are very aware that their son's broken leg has made this a challenge, but the motel was the best option available at the time.''

Since February 3 it had supported the Patterson family with emergency housing grants for 10 nights' accommodation totalling almost $2000, which did not need to be repaid.

``Our records show that the family would welcome a HNZ home anywhere in Dunedin, and we are working hard to match them to a suitable property.

``It came as a surprise then that the family rejected the private rental of a renovated home for $305 a week, due to its location.''

Mrs Patterson said the home in Green Island did not have wheelchair access and would have made it difficult for their children to get to and from St Clair School, where she wanted to keep them because two had medical issues.

They were not being overly picky, she said.

Dunedin South MP Clare Curran said it was an appalling situation that the Pattersons only made it to the top of the waiting list for a Housing New Zealand property after they became homeless.