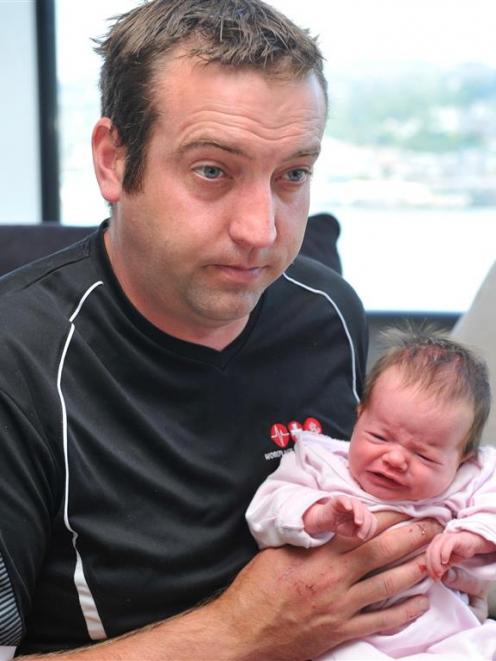 Phil Hudson, holds his 3-week-old daughter Hayley, after chasing a burglar from his Vauxhall home. Photo by Christine O'Connor.
An enraged Vauxhall resident acted on adrenaline when he chased a would-be burglar down the street after he found the man hiding in his car.

Phil Hudson (36) had just returned from a four-day holiday to Omarama with his two sons, aged 6 and 8, when he went to his garage to unpack his car.

"I thought I heard a door shut and thought that was strange because there were no doors open,'' Mr Hudson said.

"I had a hunch someone was in the garage.''

When he entered the garage, he found a man hiding inside his car and the car door open.

"He saw me and I saw him and he just sprinted.''

The offender raced down Glengyle St and through a property, disappearing into the bush.

A resident of the property, who was in the garden at the time, had been unaware of what was unfolding, Mr Hudson said.

In his effort to chase the man, Mr Hudson fell as he jumped from a wall on to the road below, badly cutting his leg and grazing his arm and shoulder.

He was angry at the time and "everything was a blur'', he said.

"My wife [Tracy] said: ‘What would you have done if you had caught him?' and I didn't even think of that.

"It's probably a good thing I didn't catch him.''

Mr Hudson, who was arriving home to see his wife and their 3-week-old daughter Hayley, said he could not believe what he had seen.

"Just the sheer fact that it was in the middle of the day and someone was just going through my car.

"Do these people just get up thinking: ‘What can I steal today?'''

He believed the offender had gone through his wife's car before going through his as it smelled of smoke.

He remained angry about the incident and said he felt violated by it.

Following the incident, a pair of sunglasses, a hands-free car kit, an uninstalled reversing camera from Mrs Hudson's car and one of the child's wallets, containing $70 cash from Christmas presents, were recovered from the bush.

Another wallet belonging to Mr Hudson's other son, also containing $70 cash, was still missing, he said.