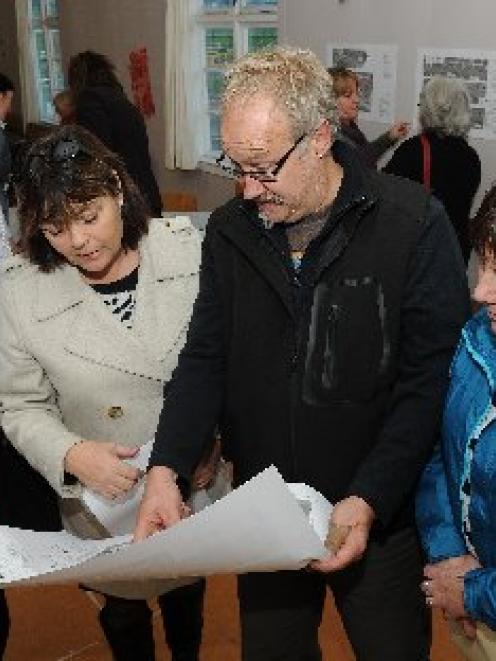 Victoria Rd residents (from left) Steve Hunt, Liz and Rene Lammers and Sue Hunt examine a drawing of a proposed shared cycle-walkway for the street. Photo by Craig Baxter.
The $4.5 million South Dunedin cycle network may not be completed within the Dunedin City Council's four-year deadline, as Victoria Rd potentially poses another stumbling block.

With only a year to go before the network is supposed to be finished, the council has nearly completed the first of its four stages.

Staff admitted yesterday even installing road markings and signage required for the first stage was more complex than anticipated.

Markings and signs are expected to finally be in place on the Portobello Rd section in the next few weeks.

While councillors say taking longer is not necessarily a bad thing if it means getting it right, infrastructure and and networks general manager Tony Avery says the council needs to get the work done by June 30, 2015 to take advantage of New Zealand Transport Agency funding.

Should it not be completed in ''good shape'' by then, the council would have to reapply for the funding and could lose it.

The project hit another potential snag this week in public opposition to a proposal to make the last route of the network a cycle/walkway on Victoria Rd that would remove 38 parking spaces.

The route was previously advertised as a path through the dunes.

Residents, business owners and cyclists discussed the proposal with council staff and Crs Kate Wilson and Andrew Whiley yesterday at a drop-in session at the St Clair Scout Hall.

Concerns ranged from safety issues with a shared path to the consultation process and the loss of parking.

Cr Wilson said she was pleased with how engaged the community was in the process and that they suggested options.

Some opponents left the session feeling positive after learning the proposal was not a done deal.

Resident Megan McPherson said she gained the strong impression the preferred dune track was still on the table, having been told that with ''the right money'' anything was possible.

However, Liz and Rene Lammers felt that while there was a political will to keep looking at other options, staff had already decided and were not listening.

Mr Lammers said protecting the dunes and the cycle lanes should be considered as separate projects, as the dune protection would need to be done soon.

Two cyclists who rode the area every day said they would continue to use the existing sand track through the dunes because of foot and vehicle traffic on Victoria Rd. They were against the shared path being installed and parks being removed.

Concerns about the consultation process were dismissed by councillors and staff as a red herring.

Mr Avery and senior transportation planner project leader Lisa Clifford said they were happy 10 working days' consultation and a drop-in session was enough to get people's feedback and would ''absolutely'' take on board the views of those affected.

Mayor Dave Cull said it was common for people, when presented with a proposal they did not like, to blame the process.

He was confident people's views would be listened to and ''would not be at all surprised'' if the project went back to the dune path option.

However, Cr Lee Vandervis said there was a clear lack of appropriate consultation on what was a significant change, and no other realistic option seemed to be being considered.

Ms Clifford said dune stability was not the only problem with the dune track.

It was also whether a more direct route would be favoured and whether it was meant to be a recreational or commuter route, and there were issues around surveillance.

There were cost/benefit issues to consider and it became a question of how much the council was willing to spend on a route that might be at risk from the elements, she said.

With regards to the work remaining to be done in the next year, Ms Clifford conceded it was ''an ambitious project''.

Mr Cull said if the work took longer, so be it.

''Frankly, I would rather it took longer if we needed to consult more of the community or reconsider things, to make sure it is the very best outcome we can get to for everyone involved.''