By Molly Houseman
5 Comments
A fix for the fence of a historic Dunedin building on one of the city’s main streets could be some way off.

Sections of a solid fence at the front of King Edward Court in Stuart St were smashed when an Intergroup truck had a mechanical failure, rolled and crashed in the front of the building in April 2018.

Dunedin resident Steve Brown, who went to school in the building when it was the King Edward Technical College, this week contacted the Otago Daily Times wondering why the damage had not been repaired after so long.

"It is an eyesore and a disgrace."

The building is owned by Ray and Gwynn Joseph, who live in the United States.

The ODT reported in October 2018 that repairs were stalled for months by insurance delays.

Building manager Roberta Coutts yesterday said it was her understanding the building was not insured.

There were ongoing discussions over who was responsible for paying for the repairs.

She believed an insurance claim lodged by the trucking company had been denied.

"The trucking company has still not taken responsibility for the damage ... I have never given up the fight." 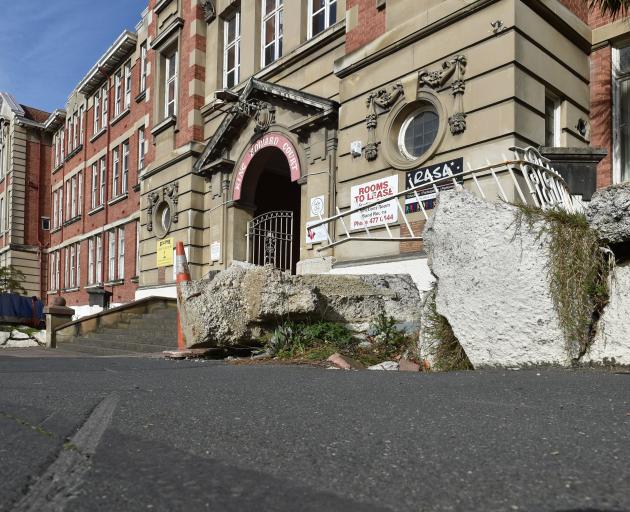 The solid fence at the front of King Edward Court in Stuart St has remained damaged for about two years after a truck, which had a mechanical failure, crashed into it. PHOTO: GREGOR RICHARDSON

Bryce McLean, an insurance broker acting for Intergroup, said Intergroup had insurance that covered damage to its truck as well as third party liability for property damage, but when a claim was lodged for both, the part referring to the building was not applicable.

That was because a police investigation found the truck had a mechanical failure that could not have been foreseen and that meant the trucking company was not liable for the damage to the fence by law, he said.

"It is not fair to say [insurance company] NZI denied the claim.

"They haven’t. There is no claim to decline. There is simply no liability on the trucking company," he said.

When the mechanical failure happened, the driver decided to crash the truck into the fence, rather than continue heading down the hill towards the Octagon, he said.

He said it was the same as if a tyre burst on a vehicle, causing it to crash into another vehicle. The first would not be liable and both vehicles’ owners would rely on their own insurance to cover their own damage.

The fence, the truck and two parked cars were all damaged in the 2018 incident.

The truck driver, a man in his 40s, was taken to hospital with moderate injuries.

The building had its centenary in 2013 and is home to a wide variety of sports clubs, small businesses and community groups.

Come on intergroup, step up. As one of nzs leading infrastructure and industrial services providers (that's from your web site) you have a duty to show Dunedin you are a caring and responsible company willing to help out.

This is interesting. I have followed this matter closely and clearly recall an earlier ODT report that no cause for the crash had been found. Now it appears that an "unforeseen" mechanical failure has been declared as the reason. "Unforeseen" or "unforeseeable"? They are different things. If "unforeseen" that implies the fault was not picked up during COF checks, servicing or daily checks of the truck's condition. "Unforeseeable" would suggest a design fault. So perhaps liability might rest with Navistar Corporation in the US, the makers of the International truck involved? Trucks do not plummet down hills for no reason. This was not an Act of God as the slippery insurers suggest. Someone HAS to be responsible. Driver error, poor mechanical condition or servicing, mechanical failure due to design fault - someone or some organisation must bear ultimate responsibility. Of course, all this could be resolved if Intergroup just showed some corporate responsibility and goodwill and just did the repairs. Sometimes common decency just has to trump the "Don't admit liability!" cries of the fat-cat insurers and their lackeys.

Agree with all of that.

If it is no hazard to anybody just leave it as is. It will fit in to Hawkins plan for the centre of Dunedin, the place is dying so why waste coin on pointless thing.

This is spot on.