Finest cheese rolls in the South 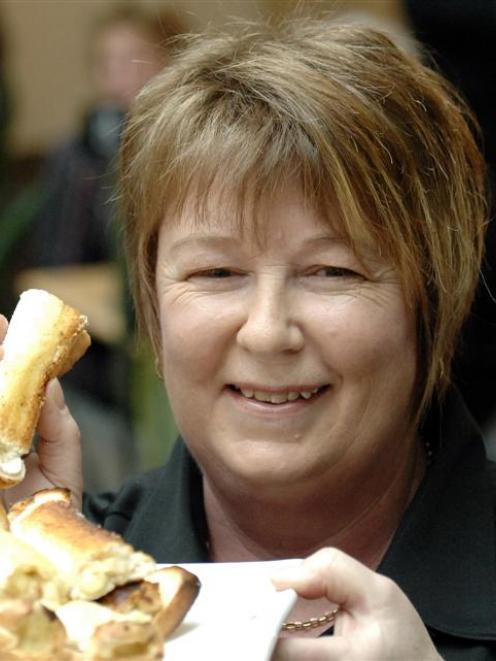 Joy Jones with her award-winning cheese rolls yesterday. Photo by Linda Robertson.
The science of making the perfect cheese roll was revealed in Dunedin yesterday.

The New Zealand International Science Festival ultimate southern cheese-roll competition drew 81 entries from around the South Island and a large crowd to the Otago Daily Times festival headquarters in the Wall Street mall.

Joy Jones, of Dunedin, was declared the finest cheese-roll chef in the South.

"It's a very simple recipe I got from my mother [Noeleen Campbell, of Tuatapere]," she said. "We started doing them as bar food when we had the New Orleans Hotel in Arrowtown about 10 years ago and they became really popular.

When we came to Dunedin two years ago, we just carried it on here."

The cheese rolls were judged on taste, texture, appearance and "ooze factor".

"The winning cheese rolls were a standout, with a substantial amount of filling - 45% cheese - and a traditional flavour of onion soup mix and evaporated milk," Prof Phil Bremer said.

"The filling was flavoursome, thick, cohesive and smooth, with a full-bodied texture that delivered a rich mouth-feel.

Heating the ingredients in the microwave was key to achieving a homogeneous, easily-spreadable filling that did not separate or go greasy when heated in the cheese roll."

The winning cheese rolls will be on sale at Mojo Cafe in the Wall Street mall until the festival ends on Sunday.

- Heat in microwave for six minutes, stirring in between time.