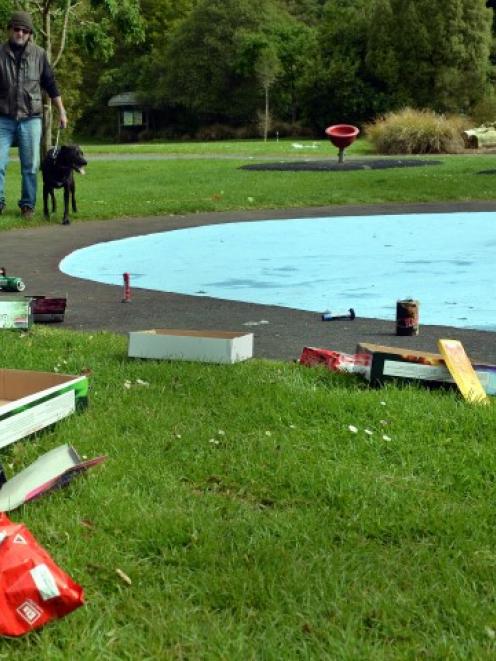 Jeff Dickie, with his dog Luke, is appalled by the number of used fireworks left at Woodhaugh Gardens yesterday. Photo by Peter McIntosh
Guy Fawkes started with a bang and ended in a fizzer for Jeff Dickie.

The Dunedin man was appalled to discover dozens of discarded fireworks while walking his dog through Woodhaugh Gardens yesterday morning.

Fireworks had also damaged the surface of the empty paddling pool.

''This is the third time this year the pool has been burnt ... it is not good enough,'' the Woodhaugh resident said.

In April, he contacted the Otago Daily Times following a party in the park, when a couch was set on fire in the toddlers' pool and the area was left covered in crushed alcohol cans, shards of glass and discarded clothing.

Mr Dickie said he heard the Guy Fawkes celebrations but was surprised at the amount of rubbish left.

He said some people who used the gardens were not cleaning up after themselves, with some taking part in acts of vandalism such as damage to the toddlers' pool.

''It is an ongoing problem in the area, whether it is St Patrick's Day, Guy Fawkes or Orientation,'' he said.

In March, Mr Dickie was involved in removing up to 40 St Patrick's Day revellers from his neighbour's Malvern St property after a party in the area.

A spokeswoman said the pool had been due to be refilled today after cracks were repaired. The damaged area would be repainted today but the refilling had been delayed for seven days, giving the paint time to dry. Security guards would patrol the pool area until then to deter vandals, she said.

Emergency services were steady responding to fireworks-related calls across the South Island, with the majority of calls in Canterbury and Nelson.

Firefighters dealt with 60 calls nationwide, including 14 in the South Island, a Fire Service spokesman said.

Only two minor fire-related calls were reported across Otago and Southland, he said.