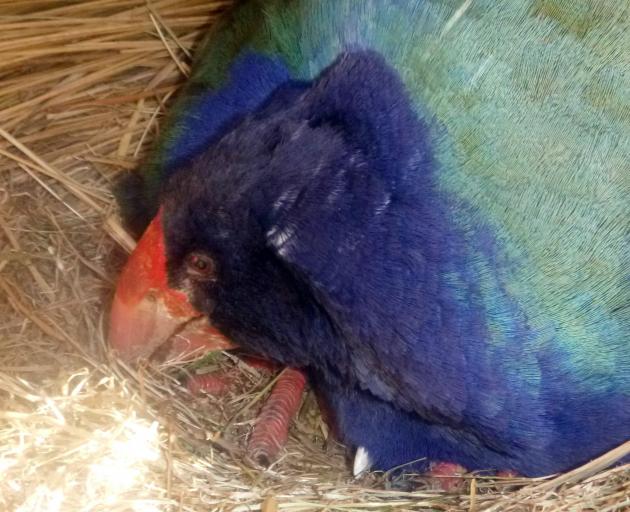 A takahe chick pokes its beak out from under its mother shortly after hatching last week. PHOTO: OROKONUI
A fluffy black takahe has wandered into the light as the first chick hatched at Orokonui Ecosanctuary to an assumed-infertile father.

Parents Paku and Quammen hatched an egg on Thursday and the as-yet-unnamed chick appeared at the weekend.

Quammen, the father, was previously thought to be infertile, and last year helped produce an egg which was thought to be non-viable.

However, the egg was discovered to be healthy and was incubated and hatched in Te Anau.

The new egg marks the first of their own the parents have raised at the ecosanctuary.

General manager Chris Baillie said the chick was staying "very close to its parents'' at the moment.

"It's imitating Mum and Dad.''

Paku and Quammen were "very good to each other'', she said.

"She had to go away to hospital a year or so ago for a broken wing and he really missed her.''

They were also very comfortable around people, she said.

Takahe benefited from the ecosanctuary's wetlands and native grasses, specially designed food and lack of predators.

Takahe were "very much'' one of the main drawcards at Orokonui, she said.

"They're much rarer than kiwi, but perhaps don't have the same profile''.

The new chick, which was one of six takahe at Orokonui, would likely be named through some kind of competition.