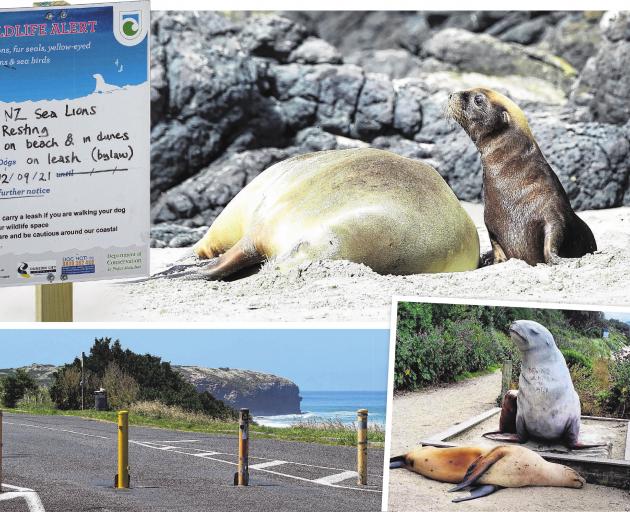 (Clockwise from top left) an alert sign warns visitors to Smaills Beach about the presence of sea lions; a 2-week-old sea lion rests with their mother on Otago Peninsula during breeding season in January; a female New Zealand sea lion rests at the feet of the statue of Mum, the matriarch of Dunedin’s sea lion population; the bollards in John Wilson Ocean Dr are raised to protect a sea lion and her pup during breeding season. PHOTOS: GERARD O’BREN, PETER MCINTOSH, LEISA DE KLERK, STEPHEN JAQUIERY
Dunedin could welcome its first New Zealand sea lion pup of the summer as early as this week.

New Zealand Sea Lion Trust chairwoman Jordana Whyte said there were more than 20 pregnant females in Dunedin’s urban sea lion population and the first pup of the year was imminent.

At present females were dispersing along the coast, venturing away from Otago Peninsula.

Over the years, Boxing Day was traditionally the first day pups were expected in Dunedin.

But there were now two females here that gave birth before Christmas.

And not only were pups often born in the same spots year after year, mothers often gave birth on or near the same day every year as well, Miss Whyte said.

"They are a little bit like clockwork," she said.

During last year’s breeding season, Dunedin made international news when the Dunedin City Council closed John Wilson Ocean Dr for a month to help a sea lion and her pup cross the road safely.

This year, the animals recently received a lot of attention on social media after a pregnant female was photographed napping at the feet of the St Clair statue of Mum, the matriarch of the Dunedin sea lion population, who first birthed a pup on a city beach in 1993.

The sea lion trust believed the female was trying hide from a male that was photographed later that day sniffing around the base of the statue where the female had been, Miss Whyte said.

Miss Whyte said there were about 100 Dunedin sea lions in the trust’s database, almost all of which were Mum’s direct descendants.

Population estimates for the Dunedin area were now about 200 individual animals, she said.

Pups were most vulnerable during the first four weeks of their lives and several Dunedin sea lion pups died every year, she said.