During her speech Ms Ardern encouraged the 4000 first-year students in Forsyth Barr Stadium to make the most of their abilities and not let self doubts impede their potential.

She shared her experience as a communications and politics student at the University of Waikato and the fears and doubts she had for her future. 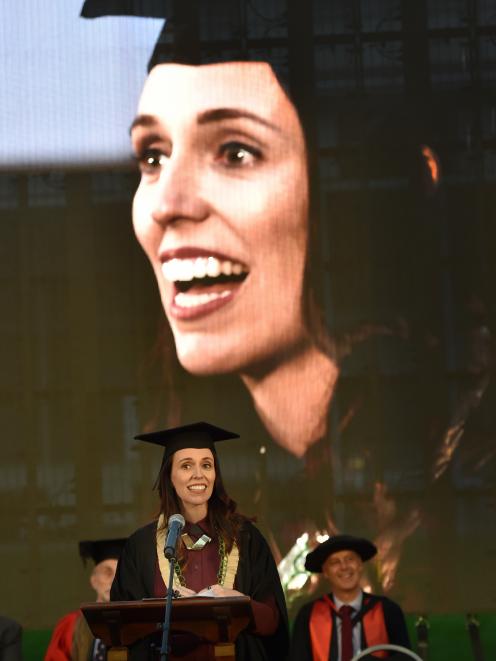 Prime Minister Jacinda Ardern shares her experience of being a student with 4000 first year University of Otago students at the university's convocation ceremony at Forsyth Barr Stadium last night.
``You may assume I had embarked on a degree in politics with some assurance of where I would go, that I was confident, I was on a path to be an MP or at least work in politics.

Ms Ardern told the new students the country needed them to tackle some of the greatest challenges facing New Zealand, such as climate change, inequality and child poverty.

In return, Ms Ardern promised her Government would take the same approach.

In a rapidly changing world, Ms Ardern said this year's intake of students would need to be flexible and take on the challenge of guiding New Zealand into the future.

One of the biggest cheers of the night came after Ms Ardern mentioned her Government's policy of first-year, fee-free tertiary study.

Earlier in the night Dunedin Mayor Dave Cull welcomed the students to their new home and implored them take advantage of all the city had to offer, both inside and outside of North Dunedin.

``You bring energy to the city and are a huge part of what makes this a vibrant and exciting place to be.''

Dunedin offered support and opportunities and in return expected respect for both the city and residents, Mr Cull said.

Prof Hayne said she was proud to welcome the most academic, sporting, community minded and musical group of students in the university's 149-year history.