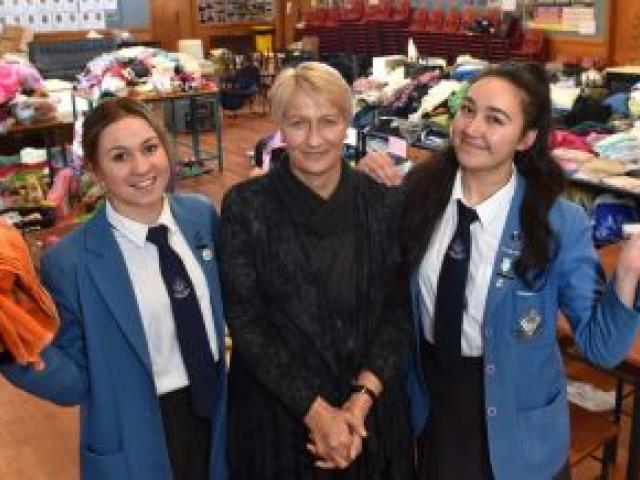 Queen's High School year 13 pupils Anastasia Manza (left) and Grace Parkes with principal Di Carter in the donation space set up in the school's hall. Photo by Gregor Richardson.
The hall at Queen's High School in St Clair is looking ''like a second-hand shop'' as donations for flood victims pour in.

Principal Di Carter came up with the idea of using the space for donated items after learning flooding in the area had affected many of the school's families.

The hall was reserved for the items last week and the response had been overwhelming, Mrs Carter said.

''It just keeps on rolling in - the generosity is amazing.''

In just seven days, items such as fridges, freezers, mattresses, lounge suites, carpet, clothes and toiletries had been dropped off. But it was not just the essentials which were being dropped off, Mrs Carter said.

''People have brought in toys and things for children.''

''Donations have come from all around Dunedin. It's like a second-hand store.''

Mrs Carter decided to set up the collection after seeing many flood-damaged household items left out on streets outside houses.

The donated goods were being distributed to people identified through agencies or schools, Mrs Carter said.

Some of those were involved with Queen's, so it was a good way to ''help our own''.

The school's year 13 pupils were in charge of setting up the hall and it had become ''their little project'', Mrs Carter said.

School management did not mind having the hall out of action, although it was expected to be returned to normal by the end of next week.

The donated items would be moved elsewhere if they were not cleared by then.