Planned catwalk route for iD Emerging Designer Show at Dunedin Town Hall. Photos: Gregor Richardson
Dunedin’s big week of fashion is in for big changes this year, as the iD International Emerging Designer Show takes centre stage. David Loughrey looks at what is in store for fashionistas, and the growing influence of gender politics on designers.

"This collection subverts this expectation by transforming the uniform into something soft and feminine, revealing the fragility and vulnerability under the armoured shell," is how the University of Technology Sydney graduate describes her work.

Naeun Kim, from the Savannah College of Art and Design in the United States, explores "the after-effects of the designer’s experience as a victim of sexual assault".

The inspirations the graduates have developed through their designs have come through in videos  iD Emerging Designer Show entrants sent to explain their collections. 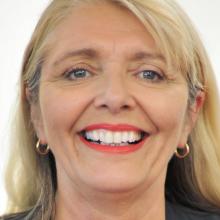 Margo Barton
They complement those of the sole Dunedin designer in the show, Dylan McCutcheon-Peat, who told the Otago Daily Times earlier this year his designs were about "male sexuality and the idea of objectification of women in terms of clothing".

"I wanted to subvert the idea of objectifying the man’s body."

"What’s really interesting is there’s a lot of commonalities coming through.

"People are inspired by the same thing, but looking at it from different perspectives."

This year those inspiration were gender issues and political statements.

Those were "most definitely" more prominent than in years past.

Late last year, Dr Barton took over the lead role on the committee, and not long after, announced major changes in an event some said was becoming stale.

The Dunedin Railway Station show, for years the main event of the week, was swept away, and the emerging designer show — outlandish, surreal and an often more rewarding experience — took centre stage.

"After reading the reviews and having lots of discussions we thought it’s time to refocus and put the show at the centre," she said at the time.

The changes came after two years of financial losses for the show and a growing realisation it needed change. In 2016 the event lost about $55,000; last year  $25,000.

Dr Barton said last week planning for the 2018 event, which runs from Tuesday, May 1, to Sunday, May 6, was going well.

One aspect that will add a wow factor for the emerging designer show is a catwalk that may not be the longest, as the Dunedin Railway Station show boasted, but is certainly one of the more unusual.

Models will march on to the Dunedin Town Hall stage, descend to the ground floor to perform two Octagon-shaped circuits, ascend to the stage then up steps to the gallery level, circumnavigate that level before taking the steps back down — in God knows what sort of footwear —  to the stage.

The idea is to get the models as close as possible to the audience, something the new set-up will certainly do.

Former Dunedin musician Anthonie Tonnon will provide live music this year and DJ Sug will also perform, as 44 emerging designers from 19 countries show off their designs.

"I feel really confident it’s going to be fantastic," Dr Barton said of the show.

The end of the railway station show will mean this year, at least, established designers will show in a different forum.

Trelise Cooper,  Mild-Red,  Company of Strangers and others will feature at Fashion for a Cure, at Emerson’s Brewery on the Saturday night.

Nom*D will have an invitation-only event.

Dr Barton said the advantage of designers having their own shows was they could do "everything as they want to".

"They can have their own hair and make up, any sort of models they want, because the reality is at the railway station they were part of a group show, which means they do not have so much creative input into that, or the choreography.

The input of local designers next year, however, would be different.

As well as the emerging designer shows on the Thursday and Friday, this year’s fashion week features close to 40 associated events from art exhibitions to brewery tours and  library tours.

Dr Barton said sponsorship and funding for the show was "still a challenge".

"What we really want to happen in the future is to find a way to be sustainable financially."

The new show did have to prove itself as an event.

"I’m hoping people will trust us — we’ve taken risks before — and that they’ll support us."

Dr Barton said she was 100% sure the Town Hall show would "blow attendees out of the water."