In the footsteps of Gingerbread George 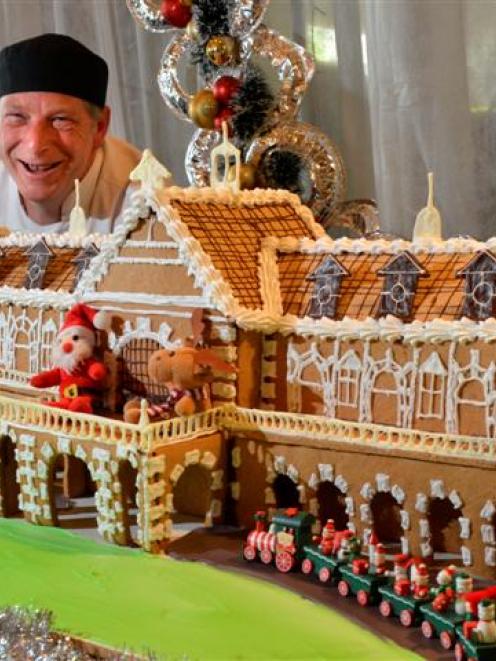 Baker Steve Mee with his gingerbread Dunedin Railway Station at the Scenic Southern Cross Hotel yesterday. Photo by Gerard O'Brien.
A Dunedin baker thinks there may be spirits in his latest creation.

Remarkably, he was unaware that the station architect, Sir George Troup (1863-1941), was nicknamed ''Gingerbread George'' after the Flemish Renaissance-style design.

''That's amazing. I didn't know that. Maybe his ghost was hanging around and inspired me,'' Mr Mee said.

He started making the 1.5m-long railway station on Saturday and completed it on Tuesday, 30 hours later.

''It's totally edible. It's all made out of gingerbread, icing and chocolate,'' he said.

''The hardest bit was getting the proportions right. I just did it by eye. I'd go down and have a look at it, then come back and do a bit more. I just hope it doesn't get too hot, or the chocolate could melt.''

Hotel guests have been intrigued by the railway station, since it was put on display in the hotel foyer yesterday.

''Heaps of people have been taking photos of it.''

The fate of the gingerbread creation had not yet been decided, but it would not be eaten, she said.