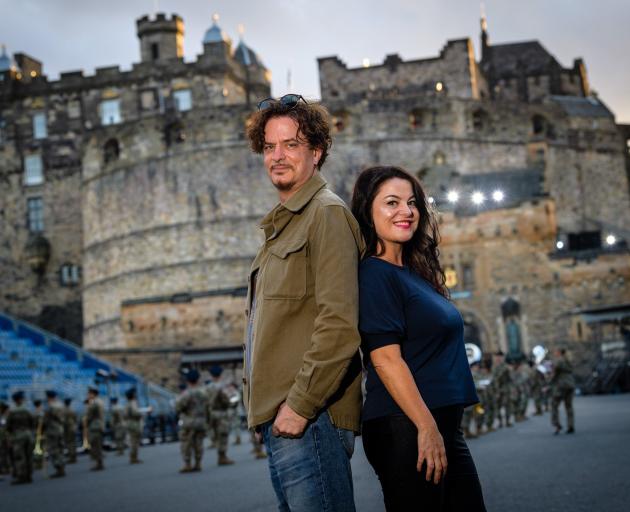 Now, the former Dunedin musician gets the best views on the castle grounds, because he is the new creative director of the show and pretty much runs it.

He told British media that if someone told him he would one day be the creative director of one of the greatest shows on Earth, he would have laughed them out of the room.

He is not the only former Dunedin musician to play a major role in the tattoo.

Singer Marla Kavanaugh has been invited to perform with her group The Highland Divas (a female trio, based in New York).

The show starts tomorrow after a Covid-19 hiatus and runs until August 27.

It is the first time Mr Braithwaite has been in charge, and The Highland Divas will be the first purely vocal act at the popular event, which reaches live audiences of nearly 9000 people a night, and reaches a television viewership of 100 million.

Since leaving New Zealand, Mr Braithwaite has become an award-winning creative director, producer and musician who has worked as a producer for the Jim Henson Company, Warner Brothers and the Mayor of London’s Outdoor Festival for the London 2012 Olympics and Paralympics.

He has created and delivered numerous live shows and spectaculars worldwide.

Ms Kavanaugh is an award-winning opera and musical theatre artist who has performed in the United States, the United Kingdom, Germany, Australia, the Netherlands, Russia and Japan.

"When I heard through the grapevine that Michael had been appointed creative director, I knew in my heart that I was to contact him and pitch The Highland Divas.

"In my dreams, I had always imagined singing at the tattoo ... it didn’t really occur to me that they don’t normally have singers.

"It was a strong and undeniable pull. So, I emailed him."

The rest is history and now she will realise her dream of performing in the tattoo.

"It really is such an honour for me, and my singing sisters The Highland Divas, to have this moment.

"And how great that two kids from Little Edinburgh [Dunedin] get to be a part of such an iconic tradition."