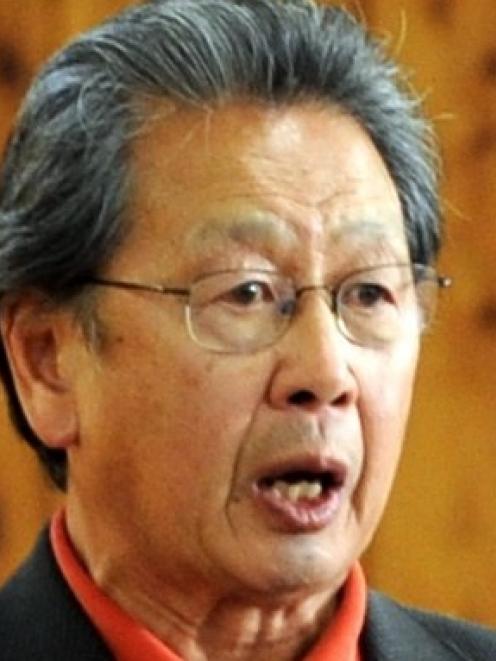 He was pulled to the floor by a female flight attendant and resuscitated as the flight returned to Dunedin.

Mr Chin, Dunedin mayor from 2004-10, was taken to Dunedin Hospital in a serious condition.

He had recovered ''disturbingly well'' from the ordeal, spokesman Rodney Bryant said yesterday.

His collapse was not a cardiac event, but appeared to be congenital - ''and was something to do with the plumbing around the heart''.

''One of the options they are considering is bypass surgery, and they are still working out if that is the correct way of dealing with it,'' Mr Bryant said.

Mr Chin, who had been heading to Wellington for a family gathering, appreciated all the support he had received.

He had also made contact with the Air New Zealand crew to thank them for their actions.

''The airline attendant picked up on that pretty quickly. She tried to get him to respond, but he wasn't responding.

''She very, very efficiently pulled him down on to the floor and got the resuscitation pack out and brought him around with the assistance of the other two crew.

''The crew were exceptional and everyone on the plane was extremely impressed.

''Once he'd been shocked, he came back around.

''They isolated him on the ground, they had him in the recovery position and the machine keeps going - it monitors the heart just to see if CPR's required.''

''He wasn't very well, but he was certainly breathing and everything by the time we'd landed.''

The flight arrived in Wellington two hours after its original scheduled landing time.

Mr Chin was expected to remain in hospital until further medical tests had been completed, and has requested privacy during this time.