Forsyth Barr House in Dunedin’s Octagon nears completion. Staff hope to return to the building by the end of the year. PHOTO: STEPHEN JAQUIERY
Neil Paviour-Smith was sceptical about turning a “grey concrete block’’ into a modern building that is sympathetic to its historic surroundings.

But the Forsyth Barr chief executive officer said the newly refurbished exterior of Forsyth Barr House in Dunedin’s Octagon was proof it could be done. 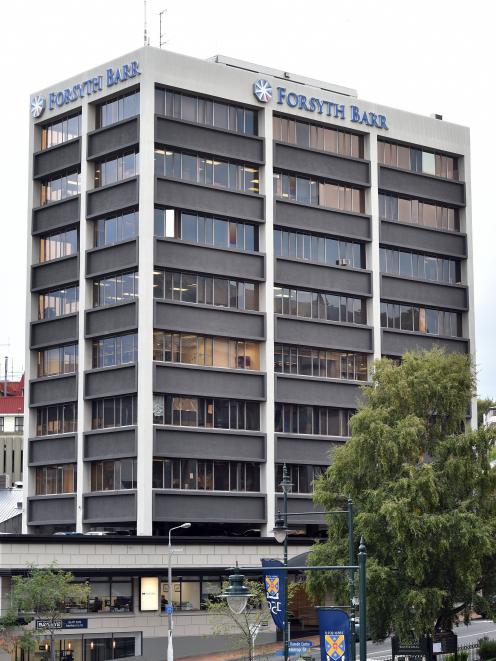 Forsyth Barr House in Dunedin’s Octagon, before its major transformation. PHOTO: PETER MCINTOSH
‘‘Before they had done anything, my comment was the building was a grey concrete block which has been painted. It’s not sympathetic to anything, particularly.

‘‘You quite often see artists’ impressions of what something is going to look like, and then when it’s built, you think that’s not quite what you expected.

‘‘But in this case, it’s definitely lived up to those expectations.’’

Mr Paviour-Smith said the 53-year-old building had been gutted right back to its shell and was being completely refurbished throughout.

‘‘So it has new surfaces, modern heating and ventilation, double glazing, and a whole new exterior and roof structure — it’s almost a brand new building.

‘‘The building’s been substantially transformed and we’re looking forward to getting back in there.’’

McAuliffe Stevens architect Craig McAuliffe, of Dunedin, said his vision was to create a modern building that remained in sync with other buildings around the Octagon precinct — especially its closest neighbours St Paul’s Cathedral and the Dunedin Town Hall.

He re-clad the tower with two different coloured tiles that draw inspiration from the cathedral which has weathered over the years, resulting in a dark sandstone base and lighter stone bell towers.

What was once a caretaker’s flat on the 11-storey building, has become a lofty site for reception and hosting clients of the investment company.

The original entry off the Octagon would be reinstated, providing a lobby with easier access for visitors in wheelchairs, and space for retailers.

Mr Paviour-Smith said staff had been working from a building in Princes St during the renovation, and were looking forward to returning to the Octagon by the end of the year.