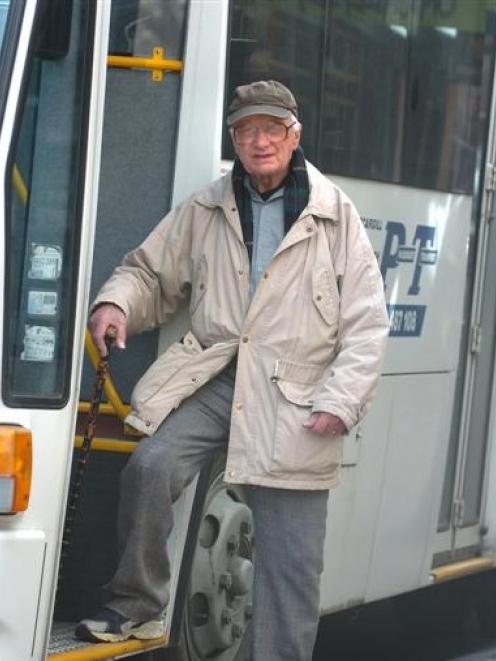 Retired London Transport bus engineer Bob Hadley (90), of Dunedin, is looking forward to the launch today of free off-peak bus travel for people over 65. Photo by Peter McIntosh.
Superannuitants will have some extra dollars in their pockets from today, when free off-peak bus transport becomes a reality.

From today, SuperGold Card and "Go-Card" holders will receive free travel on city buses between 9am and 3pm and from 6.30pm until evening services finish.

The $72 million, tax-payer-funded scheme is for people over 65.

Octagon Seniors Club member Margaret Ward (72) spends about $20 a week on six or more bus trips from her Concord home into the city, mostly between 9am and 3pm.

Since the introduction of the Otago Regional Council's Go-Card, her fares have increased by about $5 a week.

Mrs Ward agreed the scheme would help superannuitants on a fixed income.

"It will be interesting to see what happens if the Government changes. But there aren't many things in life which are free."

Mr Hadley spends up to $10 on bus travel each week, and was looking forward to making some savings on fares.

The ORC had worked with local bus operators and the Ministry of Transport to implement the scheme, council policy planning and resource director Fraser McRae said.

Like other centres, patronage of Dunedin buses peaked before 9am, when commuters went to work and school pupils used contracted services.

"But there are also significant numbers of elderly and people with disabilities who get around between peak traffic times.

"We would expect to see some increases on services where the elderly might be shopping in town and are worried about parking.

"We see it as a very good thing to promote public transport, and there is capacity in the system for extra patronage."

The scheme was fully funded by central government and would not result in any loss of revenue or extra cost to regional authorities, Mr McRae said.