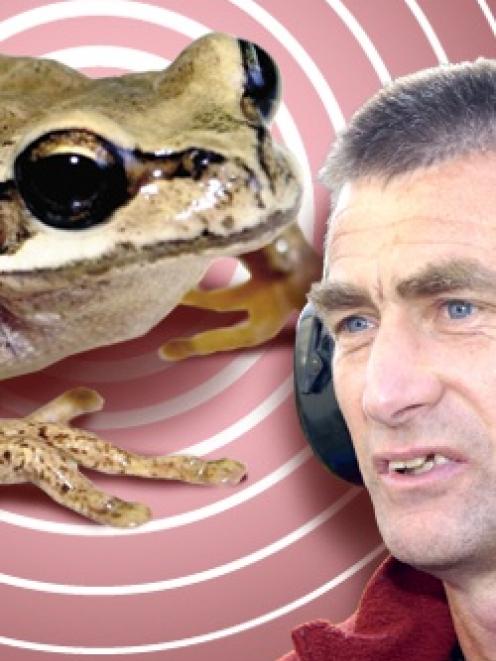 Ewen Cadzow, who says he can't sleep because of frog noise.
The mating call of the Australian brown tree frog has been causing problems between neighbours in the Dunedin suburb of Wakari.

On one side of the fence: Ruth and Larry Mackenzie-White with their ornamental pond containing a choir of "chirping" tree frogs.

On the other side: Ewen Cadzow struggling to sleep because of the noise.

Ms Mackenzie-White told the Otago Daily Times yesterday they only realised the frogs were a problem when they received a polite verbal request from Mr Cadzow to "do something" about the noise.

And soon after came a polite call from a Dunedin City Council noise control officer who was at a loss as to how the Mackenzie-Whites might solve the problem.

In the end, for the sake of good neighbourly relations, the Mackenzie-Whites called in the "frog buster", University of Otago zoologist Dr Phil Bishop, who arranged for a research student to move the frogs to a safe location.

Now, the Mackenzie-Whites claim their pond is almost silent, with just one male tree-frog that slipped the net still singing mournful solos through the night.

But Mr Cadzow said yesterday there had been little sign of improvement and he played a recording of loud frog noises to the ODT to demonstrate the noise level in his house at night.

Mr Cadzow said he was a light sleeper.

He had tried earplugs and sleeping in different parts of his house but was forced by the frogs to spend the early hours awake.

He said he rang the council three or four times without much result.

"If it was dogs barking it would be dealt with, just like that."

Ms Mackenzie-White said people who live in the suburbs had to expect some noise.

She says the frogs "chirp" in a rhythmic fashion and can continue through the night.

"If you were lying awake at night it would be incredibly annoying but his [Mr Cadzow's] insomnia is not my problem, to be frank."

Dr Bishop says any small area of water around Dunedin is likely to have tree frogs at the moment - provided there is vegetation to protect them from cats and hedgehogs.

"The frogs seem to be coming back really well this year. I can imagine there's a lot of people having similar problems - if you could call it a problem. I would love to have that problem."

Dr Bishop says the upside of having frogs in a pond is that they eat a lot of insects.

It is estimated 1000 frogs will eat 5 million insects in a year.

The down side is that the males make a lot of noise when they are looking for a mate, and they mate all year round.