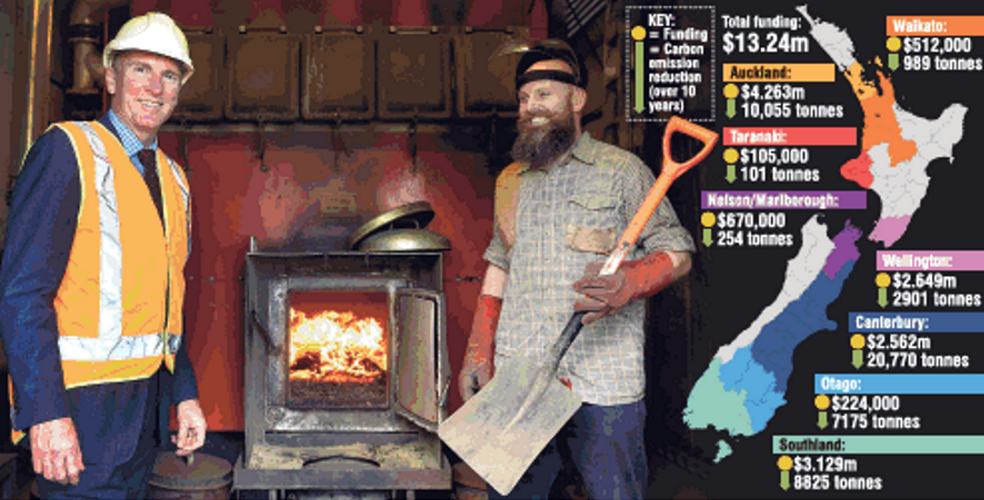 University of Otago property services manager Dean Macaulay (left) and facilities manager Callum Gilbertson show off the Arana College coal boiler which will soon be replaced with acleaner alternative. PHOTO: PETER MCINTOSH
Millions of dollars are being pumped into Southern organisations in a bid to clean up their energy sources.

The Government has announced the latest tranche of projects to receive funding as part of its plan for a carbon neutral public sector by 2025.

The Department of Corrections will receive $2.829 million to replace a coal boiler with a wood-fired boiler at Invercargill Prison. Corrections will invest $1.213 million from its own budget.

It was estimated that will reduce carbon emissions by about 8742 tonnes over 10 years.

The University of Otago will also get a funding fillip, this time of $224,000, to replace a coal boiler at Arana College. The University will chip in $337,000.

That was expected to reduce carbon emissions by an estimated 7175 tonnes over 10 years.

And the Southern District Health Board will get $300,000 to replace a diesel boiler with an electric heat pump solution at the Tokanui Medical Centre, reducing carbon emissions by an estimated 83 tonnes of carbon dioxide emissions over 10 years. The health board will invest $450,000 from its own budget.

Climate Change Minister James Shaw told the Otago Daily Times he had visited several schools and universities that had received funding for similar projects, and the staff and students of those places were ‘‘pleased and proud’’ to be part of the process of decarbonisation.

‘‘I think in a number of cases people have been feeling pretty bad that the institution they’re part of has a coal boiler in the basement and that’s how they get their heat and power, so I think it’s pretty significant in that sense.’’

University property services director Dean Macaulay said the university was delighted by the funding, which would allow it to continue to drive its decarbonisation efforts and switch Arana College’s heating system off coal.

‘‘The conversion of the Arana boiler represents our dedication to offer a living and learning environment that reflects how important sustainability and environment is to our student body.’’

The current boiler, installed in 2005, will be converted in December for use when students arrive in 2022, while the new boiler solution will mostly likely be ready for use in Semester 1, 2023.

‘‘The Property Services Energy Management team has already been successful in removing coal from all of Otago’s other colleges and the main heating system for the Dunedin campus.’’

The Southern projects were part of a total funding announcement of $13.2 million from the Government’s $220 million State Sector Decarbonisation Fund.

Mr Shaw said most New Zealanders want to be able to access the public services they need in warm, energy efficient buildings powered by clean energy.

‘‘Because of today’s announcement I am confident that this future is closer within reach than ever before.’’