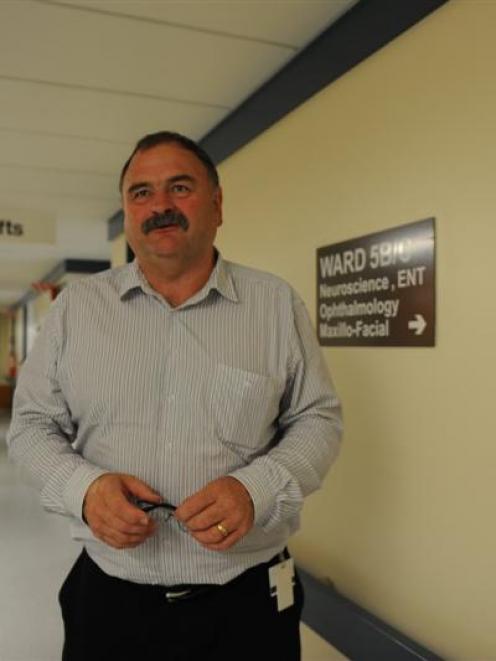 Those fearing a Dunedin Hospital downgrade misunderstand the SDHB's problems, says Dick Bunton. Photo by ODT.
A controversial health plan says some specialties at Dunedin Hospital are struggling and may need to be combined with those of other health boards. Health reporter Eileen Goodwin set out to discover more about the at-risk services.

Just what constitutes a struggling specialty at Dunedin Hospital is decidedly tricky to pin down.

Specialty vulnerability has been identified in a new Southern District Health Board plan; but centralisation as a suggested remedy has drawn sharp reactions from some quarters.

Unlike most health planning documents, which typically gather dust, we are told this one will be used to plan the new clinical services building at Dunedin Hospital. The building is expected to cost upwards of $200 million.

Some specialties - both core and sub-specialty - were struggling, the plan said, and could need to be combined with those of other boards, with Dunedin perhaps serving as an outreach service to maintain local access.

Opposing any such move is the Dunedin School of Medicine, which warned centralisation risked replicating discarded ideas from overseas.

The plan initially flew under the public radar, but has recently fed anxiety about Dunedin Hospital and the city at large being neglected and forgotten by the Government.

A vocal online social media campaign has emerged in the past couple of weeks.

''It is downgraded - it's falling to bloody bits, there's no question about that, so therefore we need to upgrade it.

''But somehow the downgrading of the hospital was linked tightly with vulnerable services being downgraded, and that was a link that was wrong.''

The Otago Daily Times had requested to individually profile specialties deemed to be vulnerable, but that was effectively declined.

With the exception of cardiothoracic surgery, illustrated as a case study in the plan, the board has not named the specialties.

Cardiothoracic surgery is run by Mr Bunton and one other surgeon.

It will be helped if new patients come from South Canterbury (detailed in the sidebar story), but even without the extra 30 or 40 patients a year, it had enough patients in the South alone to be viable clinically, Mr Bunton said.

And this is where it starts to become tricky distinguishing what is a clinical problem, and what is simply balancing the books in a large, sparsely populated health board area.

''There's also services that are vulnerable because they're too bloody expensive.''

''I'm not going to say specific services ... because there'd be a hell of an uproar amongst every bloody consultant in the hospital if I'd targeted their service as being in danger.''

The ODT was shown a list of three specialties, including cardiothoracic surgery, deemed clinically vulnerable because they were run by two specialists.

One was a mainstream specialty to which a new appointment had been made, potentially eliminating its vulnerability.

Asked if financial considerations were not really clinical matters, he disagreed: ''If you can't afford it, you go broke.''

So how does Mr Bunton see the future of Dunedin Hospital?

He says the biggest change for patients will probably be services moving out to GPs, rather than to larger centres.

Many specialist outpatient checks should be done by GPs, and having the hospital as the ''provider of last resort'' would hopefully mean less demand in the emergency department.

''In other parts of the country if you sprain your ankle or twist your finger you go to your GP and pay.''

As for the medical school, its concerns were understandable given its need to recruit quality staff, but it had little to fear as there was no plan to downgrade the hospital.

He acknowledges the board would not be able to maintain all of its services without the medical school's existence.

In the next year or so, the board would give more detail on what the future holds.

''And that discussion and the specifics that you're struggling for, and we're all craving for, is yet to take place.''

Some of it had led to positive collaboration, he said, citing a recent 19-hour neurosurgery procedure at Dunedin Hospital involving surgeons from Dunedin and Christchurch.

However, the relatively large physical size of New Zealand had to be kept in mind, especially for services with an emergency element.

''A lot of the people who talk about health and talk about numbers always get their information from major metropolitan areas [overseas].''

When the Otago Daily Times remarked the hour-long interview had not made the situation all that much clearer, Mr Bunton said cheerfully, ''You know as much as I do.''

• Ten-year plan for health services in the South.

• Board members to consider approving plan on March 5.

• Some submitters opposed suggestions of centralisation.